Aircraft Carrier Demon is an antagonist of the Kantai Collection series who first appeared as the E-3 bosses of the Summer 2014 Event. She is one of the minions of the Abyssal Fleet. She is the alter ego of the Aircraft Carrier Princess.

She was voiced by Fujita Saki and drawn by Akira.

Aircraft Carrier Demon was a humanoid who generally appeared as a young woman with white skin with black fades on her neck, arms and legs, orange eyes and very long, flowy white hair tied into a side ponytail using a black hair tie. She had large black armour covering her arms and legs and she wore a typical sailor shirt black in colour, attached with a decorative black ribbon and also a short black dress. She was surrounded by a black monster that resembled somewhat of a goblin shark which had black teeth and turrets, cannons and glowing weapons.

In her summer form, she let her hair loose and wore a withered black hat, black side-tie bikini and the monster surrounding her was also surrounded by multiple white tropical flowers with a light grey violet tint and black leaves and stigma.

In contrast to the Aircraft Carrier Princess, she seemed to be more level-headed and less provocative. 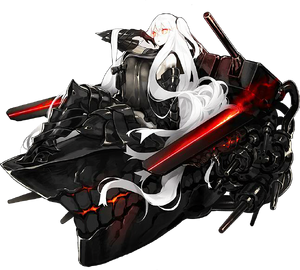 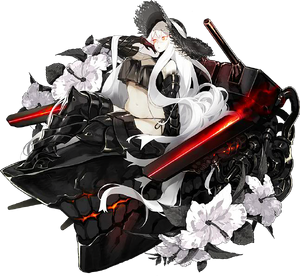 Summer Form
Add a photo to this gallery

Retrieved from "https://villains.fandom.com/wiki/Aircraft_Carrier_Demon?oldid=3716965"
Community content is available under CC-BY-SA unless otherwise noted.