Kill all ships-girls she can, take control of the seas on Earth (Abyssal goal in general), exterminate humanity

She was voiced by Fujita Saki and drawn by Akira.

She is one of the enemy-bosses introduced during the Summer 2014 event, encountered first during the initial map of the MI segment, before being fought again during the penultimate MI map.

She also appears at the pre-boss node of the Extra Operation, the counterattack on the fleet girl HQ. She shows up again in the Fall 2014, Winter 2015, Spring 2015 and Summer 2015 events. She later returns as an optional encounter in map 6-1.

Unlike Abyssals Destroyers and Light Cruisers; Aircraft Carrier Princess (and many other humanoids Abyssals), was a human (Ship-girl) in her past. At one point of her history, she was sunk and died. Years later (months or even days), she was reborn as an Abyssal Ship like all Ship-girls who were killed (sunken). The "creature" that is creating and commanding the Abyssal Fleet; the same being who created Aircraft Carrier Princess, is unknown.

All Abyssals are characterized by their pale skin, black armor plates, red glowing eyes. Just like all the Abyssal girls, she is not so different in the main characteristics. In her Demon form, she wears a short black sailor dress, metal thigh-high boots and gauntlets , and has a long white hair with a side-tail.

Her Demon and Princess from are not so different in body and facial features. The only thing that changes in her Princess forms are the garments. In her Princess form, her clothes are completely torn and frayed, leaving her body exposed. 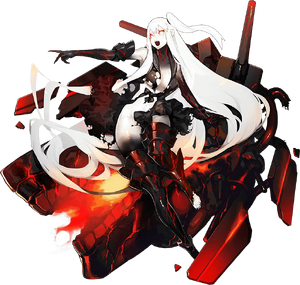 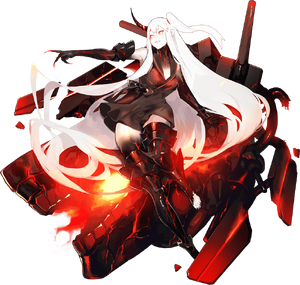 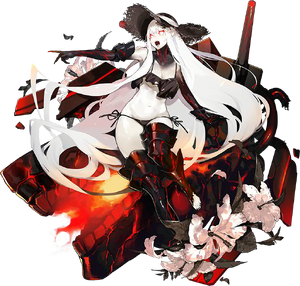 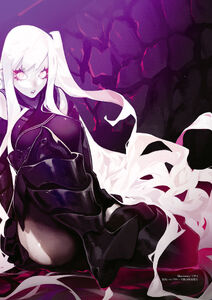 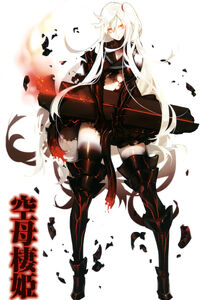 Nyantype 62
Add a photo to this gallery 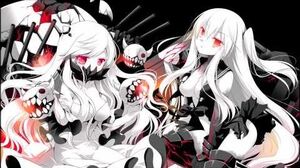 Retrieved from "https://villains.fandom.com/wiki/Aircraft_Carrier_Princess?oldid=3551784"
Community content is available under CC-BY-SA unless otherwise noted.