Captain of the Gundalian Forces

Member of the Twelve Orders

Follow Barodius and Gill in destroying Neathia and succeed in possessing the sacred orb and rule the universe (failed).

Airzel is a supporting antagonist in Bakugan: Gundalian Invaders. He is captain of the Gundalian Forces and is Gill's student and protégé. He is the arch-nemesis of Captain Elright and Shun Kazami.

He was voiced by Eiji Miyashita in Japanese, Lyon Smith in English, and Márcio Marconato in Portuguese. smith also voiced Masquerade and Prince Hydron

Airzel is fierce, overconfident, and reckless. He is also very loyal to his superiors, Barodius and mentor Gill. Airzel also seems to have no issue with torturing and murdering others, especially if they are Neathians. Like his mentor, Airzel despised Kazarina and has no sympathy for her death when he revealed due to all of her ridicule and treachery, she deserved everything that is coming at her.

In the end, Airzel's recklessness, overconfidence and blind loyalty to Gill proves to be his downfall as he is killed by Barodius and Dharak when rushing over to Gill's ship to protect him and failed attempt to try talk Barodius in sparing him.

Airzel first appears consulting with Emperor Barodius along with the rest of the Twelve Orders. He doesn't seem to get along too well with Stoica as he is seen telling him to take things seriously for once.

He is later seen alongside the other Twelve orders saying how they must get their hands on the element.

He appeared again overseeing a battle on Neathia against the Castle Knights. He, Gill, and Kazarina joined in the battle with Airzel beating captain Elright and kidnapping him.

As he is torturing him, he notices the Bakugan Brawlwers arrive to help Neathia. There he and Strikeflier battle Shun Kasami for the first time. He finds his skills impressive, but before they can end it the scared orb sends all Gundalions away.

Airzel then leads a team to destroy the third shield in Nethia. He takes Mason Brown as a battle partner, telling him not to mess up. The two of them battle Marucho and Jake, and although Avior loses, Strikeflier takes both Aquamos and Coredom out. In the second round, the two Gundalans are about to win the brawl, when Marucho freezes his foes, leaving the battle without an outcome.

After Kazarina and Lena Isis fail to stop the second shield from reactivating, he retreats to avoid being stuck in Nethia.

Gill later tells him and Stoica to get ready for the Nethan attack and later the four twelve orders send out their bakugan to battle Nethia. Airzel fights Shun in a rematch and Faiba comes to help Shun, only to be distracted by Kazarina and Lumagrowl. Lumagorwl beats Arunt while Hacktor takes out Lumagrowl, leaving Shun to be wide open for Airzel to attack, causing him to win. He then retreats when Linehalt unleashes his forbidden power.

In Gundalia, Airzel and Gill see Shun, Marucho, and Dan come to find Jake. Barodius orders them to take care of the Brawlers, to hey trap Shun and Marucho in another room. and battle them. Airzel and Gill proved to be a powerful duo, as they quickly overpowered Shun and Marucho, but Gill defeated both of them using a Gate Card that removed Hawktor and Akwimos' Battle Gear and activated Krakix's Level 2 Class Ability.

He was seen demanding a status report when Ren Krawler and Linehalt attacked the palace to provide a distraction for Shun, Marucho, and Fabia. He later corners them as they head towards the elevators and battles Marucho, when he stays behind to buy Shun and Fabia time to rescue Dan. 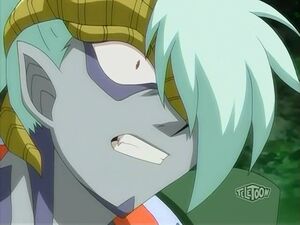 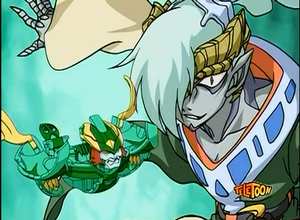 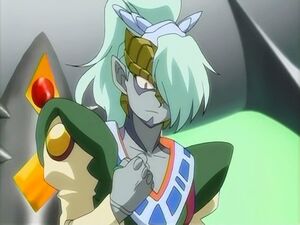