Villains Wiki
Register
Don't have an account?
Sign In
Advertisement
in: Star Wars Villains, Evil from the Past, Redeemed,
and 40 more

Mastery of the dark side of the Force

Studying the dark side of the Force

Free his followers from the grasp of the Jedi Order

Ajunta Pall is a posthumous antagonist in the Star Wars franchise. With much of his past being left ambiguous, what is certain is that Pall was a Force-sensitive human who was a member of the Jedi Order before or following the First Great Schism. An extremely observant and curious man, his fascination with the force led to him becoming a potent wielder of the Force, using his talents to quickly rise through the ranks of the religious organization, obtaining the rank of Jedi Knight, then Master.

His thirst for knowledge eventually led him and some followers of his within the Order, to become intrigued by the alluring possibilities and potential that the dark side of the Force possessed, specifically with the ability to shape and twist life through alchemy. This resulted in him studying material that was considered taboo by the rest of the Order. Upon being barred from ever researching the dark side, Pall and his followers declared war on the Order, resulting in a massive conflict that came to be known as the Hundred-Year Darkness. He is also the founder of the entire Sith dynasty.

He appeared in the 2003 video game Star Wars: Knights of the Old Republic as a minor character, being voiced by the famous voice actor Tom Kane.

Born a Force-sensitive human sometime before 7000 BBY, Pall was taken by the Jedi Order to serve as a member of their organization. Pall quickly proved to be naturally skilled in wielding the Force, resulting in him gradually climbing the ranks of the Order before finally being granted the title of Jedi Master.

An astute learner with an unquenchable thirst for knowledge, the Jedi Master began to study in the ways of alchemy. Through his fervent research, Pall discovered the secret of genetic manipulation and the ability to permanently alter living beings. Appalled and fearful of this new knowledge, the Jedi Order banned any further research on the topic, claiming it to be an act of treason against the Force. The Jedi High Council quickly sought to erase all races of this discovery, banning the practices of Pall and his followers and branding them as traitors.

Enraged by what he perceived to be cowardly arrogance, Pall and his followers declared war on the Jedi Order as a whole, thus beginning the civil war which became known as the Hundred-Year Darkness. Despite managing to kill several Jedi Masters and cause significant damage to the Jedi Order, Pall and his followers were ultimately defeated at the legendary Battle of Corbos, bringing an end to the century-long conflict. After he and his fellow Dark Jedi were put on trial by the victorious Jedi, they were stripped of their wealth and titles and promptly banished from the Galactic Republic, forcing the defeated party into the Outer Rim.

In their search for a habitable world to colonize as their homeworld, the Dark Jedi discovered the desert planet of Korriban, which was home to the Force-sensitive species known as the Sith. Despite being technologically inferior than the newly-arrived Dark Jedi, the latter took great interest in the Sith due to their knowledge about the Force, an interest which quickly turned to imperialism. To defend their culture and home, the Sith sided under their king, Hakagram Graush, to repel the foreign invaders. Despite their best attempts, the revolt was quickly quelled as Pall had managed to persuade the king's second-in-command into joining the dark side. After personally executing the troublesome king, as well as gaining the awe and admiration of the remaining Sith, Pall had cemented his control over Korriban, founding what was to become the first Sith Empire.

As the newly-proclaimed "Jen'ari" (meaning: Dark Lord), Pall expanded his fledgling empire across multiple worlds, claiming the planet Ziost as its capital and his new home. In 6895 BBY, the Dark Lord Pall died and was buried with the Valley of Dark Lords back on Korriban. However, due to his extensive knowledge in alchemy and the Force as a whole, Pall's spirit persisted with his tomb long after his passing.

After spending several centuries in complete isolation, Pall began to question the legitimacy of the Dark Jedi (now referred to as the Sith) and his actions as its founder. He eventually grew to resent the very same organization he founded after witnessing the megalomaniacal acts of imperialism his successors brought upon the Galaxy and each other, growing to regret having created such a tyrannical order.

Several millennia after his physical death, Pall was unknowingly awakened by the Jedi Knight known as Revan. Entering Pall's mausoleum, the Jedi youth sought to obtain the dark lord's famed sword in order to gain prestige with the Sith academy based on Korriban in order to hopefully obtain and access a Star Map. Pall materialized in spirit form in front of the ambitious warrior, relaying to him the faults of the Sith and his remorse for having created them. Having grown disgusted at the Sith's continued in-fighting and hypocrisy, Pall sought only to be forgiven and freed from his guilt. After he retrieved the sword, Revan told the deceased dark lord to turn away from the dark Side and return to the light.

Having been encouraged to begin anew, Pall let go of his guilt and became one with the Force, finding peace after millennia of anguish. 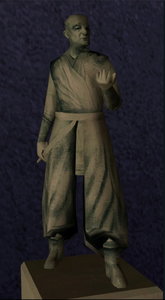 Possible statue of Pall in the Dantooine Jedi Temple 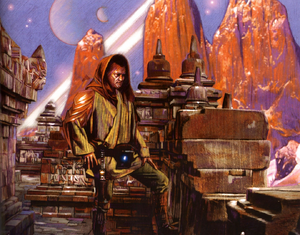 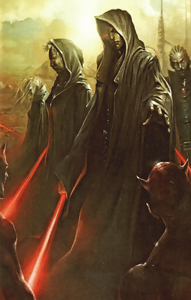 Pall and his followers arriving on Korriban