Aka Manto (in Japanese: 赤マント; translated to as "Red Cape") is a malicious spirit who haunts public bathrooms, particularly female bathrooms in public schools. He asks his victims a series of questions before brutally killing them.

Aka Manto was originally a handsome young man, most likely a high school student, when he was alive. He was often seen wearing a distinctive red cape. Because of his charming beauty, many flirtatious teenage girls admired him and constantly hounded on him. Unable to let this continue, Aka Manto concealed his face with a white mask so that the teenage girls won't be able to notice him. It is unknown what happened next but it is most likely that whilst hiding in the last stall of the female bathroom from the frantic admiers, Aka Manto somehow died. After his death, Aka Manto returned as a malicious spirit and promised a brutal death to anyone who entered the last stall of the female bathroom.

Anyone can summon Aka Manto when they use the last stall in the female school bathroom. Aka Manto would manifest in front of his victim and he would wear a red cape and conceal his face with a white mask.

If the victim chooses red, Aka Manto would slit their throat or decapitate them with a knife. The blood would flow from their necks and onto their clothes, making it appear as if they are wearing red clothes.

If the victim chooses blue, Aka Manto would strangle them until their face turned blue or they die of suffocation. In some versions, his hands would emerge from the toilet instead in order to strangle them.

Alternatively, if the victim tries to outsmart Aka Manto by choosing a different color, the floor would crack open and a pair of hands would drag the victim into Hell. If the victim somehow decides to choose the color yellow, Aka Manto would shove their face into the toilet, making them yellow like urine without, in some versions of this, killing them.

The only way to escape Aka Manto and ultimately survive is by choosing no color. To this day, there is no method to completely defeat or kill Aka Manto. 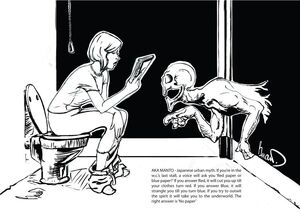 The Aka Manto appearing in front of a victim. 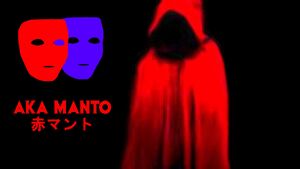 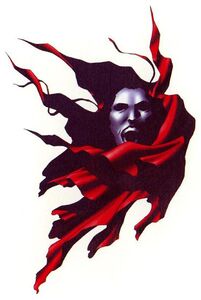