Ninja of the Hidden Star Village

Obtain the full power of the star chakra so that he can conquer the Five Great Nations.

Akahoshi (in Japanese: アカホシ, Akahoshi) is the main antagonist of the Star Guard Mission Arc. He assassinated the Third Hoshikage with the help of his allies, Shiso and Yotaka when the Third discontinued the star chakra training. After the Third's death, Akahoshi manipulated the people in the village into doing the star chakra training despite knowing its danger. He wanted to gain the full power of the Star chakra to one day dominate all Five Great Nations.

He was voiced by Mitsuru Miyamoto in the Japanese version, and by Kirk Thornton in the English dubbed version, who also voiced Kisame Hoshigaki and Saïx from the Kingdom Hearts franchise.

Akahoshi was obsessed with obtaining power and followed strictly behind the ideology of individuals dying for the greater cause of the village. His ideology and stubbornness, led Akahoshi to depravity. In the quest to obtaining more power for the village, Akahoshi murdered the Third Hoshikage because the latter outlawed the practice of using star chakra. Akahoshi did not care about the dangers the star chakra posed to the children of the village and encouraged them to continuously train in hopes of building up a strong military force in the village.

Aside from his calm and commanding personality he displayed, Akahoshi revealed his true nature as sadistic individual who laughed after murdering the Third Hoshikage and as a stubborn person who wanted power over the safety and lives of the villagers. With his henchmen, Shiso and Yotaka, Akahoshi only cared for them because of how helpful they were to him but did not cared about their safety when he recklessly used the star chakra. Akahoshi also displayed selfishness and brutality by how he went on a rampage when he gained the full power of the star chakra not caring about the safety of his fellow villagers.

When he learns about Natsuhi's motives, he disguises himself and captures Sumaru (Natsuhi's son). At the time he did this, he encounters Naruto and Neji who attempts to stop him. He brings Sumaru back to his building in hopes of luring out Natsuhi. Akahoshi manages to encounter Natsuhi and wants her to comply with his demands for her son's safety. Naruto and Neji manages to make it to the destination where Akahoshi and Natsuhi were at. When they continue their fight, Akahoshi attacks Natsuhi with his star chakra attack which results in her and Naruto falling off the cliff they were at. Neji asks why he attacked Naruto to which Akahoshi lies that he was in the way.

Akahoshi soon learns that Sumaru was taken by Rock Lee and Tenten. Akahoshi later encounters Natsuhi again and confesses to murdering the Third Hoshikage. He fights Natsuhi until he defeats her. Later when Akahoshi was telling the village about his plans as the Fourth Hoshikage, he encounters Natsuhi and the leaf ninjas again. Akahoshi uses his star chakra to take control of Sumaru's mind for a moment to force him to say that he will sacrifice himself for the village. Akahoshi forces Natsuhi into a situation where she has to choose to either save her son at the cost of her life or die. Akahoshi murders Natsuhi, tells the leaf ninja that their job in his village is done, and leaves Sumaru to the leaf ninjas calling him the son of a traitor. Later when Sumaru and others mourn for his mother in a building, Akahoshi orders his men to burn down the building he and a few others were in.

In the village, Akahoshi is confronted by people in the village over the effects of the star chakra training on the children. When they press him for his actions, Akahoshi stubbornly supports the star chakra training and did not care what happens to the children because he sees them as necessary sacrifices to the village's growth. After getting press more by the villagers, Akahoshi confess to murdering the Third Hoshikage with the help of Yotaka and Shiso. Shiso questions whether Akahoshi takes things too far. Out of desperation, Akahoshi responds by implanting the meteor into his chest to gain more power. With his new power, Akahoshi attacks everyone indiscriminately. Naruto uses his rasengan to destroy the meteor which results in Akahoshi's defeat. Afterwards, Akahoshi, Yotaka, and Shiso are arrested by the authorities in the village and imprisoned. 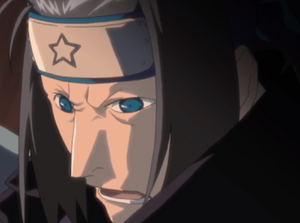 Akahosi assassinating the Third Hoshikage when he was denied to continue his star training. 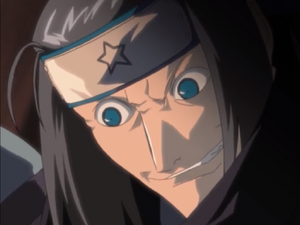 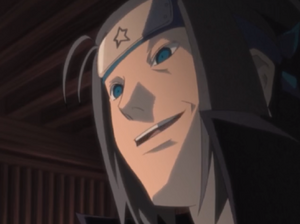 Akahoshi planning on continuing the star training after killing the Third Hoshikage. 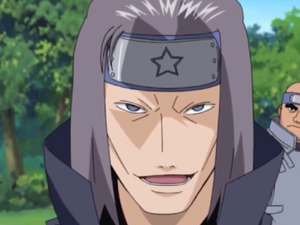 "Greatness cannot be achieved without some sacrifice, It's for the village, a true shinobi understands that"