Redeemed
Akakamakiri is one of villains of Ginga Densetsu Weed: Orion. He is eldest son of Kamakiri and leader of his pack. He is older brother of Kurokamakiri and Kamajirō.

He is brutally angry and violent, and reminds most of his father, but he is softened by Sirius, one of Weed's children.

When he was still a puppy, his father beat him, his brothers and their mother. When they were seven months old, their mothers left, without taking any of the boys with her. Soon the brothers escaped from their violent father.

After the volcanic eruption, Akakama comes with his brothers and packs to Ōuu. They save the lost of Sirius from freezing and take this to their packs. The acaric Akakama often pierces young puppies and sometimes their brothers.

After Kurokamakiri and Kamajirō joined Orion's packs, Akakama does not accept the idea, but follows his brothers in the aftermath of the flock. Kamajirō starts to be bad due to his previous wound, and Akakama comes out to help her. He ride Kamajirō on his back, but soon his younger brother dies. Akakama rages and tries to revenge Kamajirō's death by killing Orion, but Kurokamakiri blocks it. Akakama goes to his own ways crying out of rage.

Akakama meets the saddle of Tenka and hypnosis in power passes with it for a while. Later he will meet Gennai and lose the battle against this. Akakama asks another dog to kill him, but Gennai does not agree.

Later, he meets his mother again after years but is furious with her because she left him and his brothers in the past and has now acquired a new family.

Akakama wander off alone and will face the final battle at the time Futago Pass, Matheus strewn forces, until the scene becomes Weed, who saves him. Later, Akakama challenges Masamune Kurohabaki and tries to strike but drops himself. Orion, however, will save him where he moves.

He is associated with the Ōu forces. After the last battle, Akakamakiriand Kurokamakiri meet again. 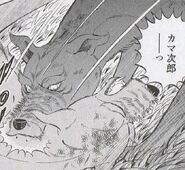 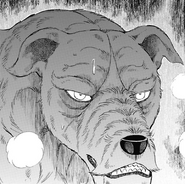 Retrieved from "https://villains.fandom.com/wiki/Akakamakiri?oldid=3363258"
Community content is available under CC-BY-SA unless otherwise noted.