Member of the Akuma Clan

Build a tunnel to Downworld so the Akuma Clan can invade Japan.

Demon Sibling
Akanida is a red-colored member of the Akuma Clan and the main antagonist of episodes 3 and 4 of Akumaizer 3 alongside his brother Aonida.

He was voiced by Kaoru Shinoda.

Akanida traveled to the surface to abduct human children to be converted into combatants for the Akuma Clan. He targeted a group of schoolchildren being taught by a teacher named Yoshiko and sent his Aguma to go and capture them, but the Akumaizer 3 appeared to fight them off and thwarted Akanida's initial attempt to abduct the children. Akanida later made another attempt to abduct the kids and brought his brother Aonida to provide backup against the Akumaizer 3. The two were successful in kidnapping the kids, leaving Yoshiko temporarily blinded, and brought them to their oceanside encampment to conver them into combatants. However, the Akumaizer 3 tracked them down and showed up to rescue the kids. While his brother fought the other two Akumaizers, Akanida battled Gabra and was destroyed after the water demon flung him up and to the ground with his flail.

However, Aonida survived and was able to bring back his brother thanks to Akanida's special resurrection power. The two hatched a plan to kidnap Yuri, a construction contractor and architect, and to use her and her team to build a tunnel to the Downworld so the Akuma Clan could invade Japan from there. They also planned to drive apart the Akumaizer so they would be easier to defeat. During a confrontation with the Akumaizer, while Aonida and his Aguma were fighting Xavitan and Gabura, Akanida took Evil on alone and allowed him to strike him down, so it would seem like Evil lied when Aonida resurrected him and he turned up alive again. After attacking the Akumaizer 3 to kidnap Yuri, Akanida told them that Evil was a double agent for them and revealed he had Evil's Jo Gun, which he claimed Evil had given it to him, but Evil vehemently denied it.

After they drove Akanida off, Evil was put in charge of guarding Kenichi and Yuri while Xavitan and Gabra went off to confront Aonida. However, Kenichi distrusted Evil due to what Akanida had sent and ran off, allowing Akanida to capture Yuri while Aonida had the other two Akumaizer occupied. To keep Evil from stopping him, Akanida lured him into a trap using a mirror, as Evil would freeze up if he saw his own reflection. Evil managed to break free but it was too late, as Akanida had already made off with Aonida. Out of shame, Evil left the Akumaizer, defeating Akanida again as a farewell gift to them. However, after catching sight of Aonida reviving Akanida and boasting about their plan to divide the Akumaizer with him, the two Akumaizers realized the truth and rejoined with Evil to defeat the Oni brothers. Together, the three Akumaizers were able to destroy both of them. 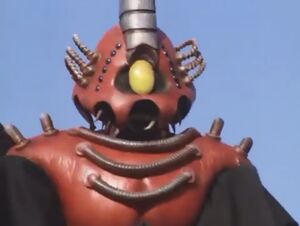 Retrieved from "https://villains.fandom.com/wiki/Akanida?oldid=4103245"
Community content is available under CC-BY-SA unless otherwise noted.