Capture all of the Tailed Beasts to recreate the Ten-Tailed Beast and use its power to change the world in their image (failed).

Terroristic Ninjas
The Akatsuki was a secret criminal organization which gathers most of the major antagonists and later the main antagonists of the Naruto series. The Akatsuki contains over 10 official members, a handful of unofficial members, and all except for one are males. It was founded by Yahiko, and Konan with Nagato as the leader though he acts under the alias known as Pain.

However, only Nagato, Konan and Obito, who posed as Tobi, and Zetsu, a by-product of Madara's experiments, knew the true intent was to to reform the Ten Tails as part of the Eye of the Moon Path Madara devised to rule the world as a god.

The Demonic Statue of the Outer PathEdit 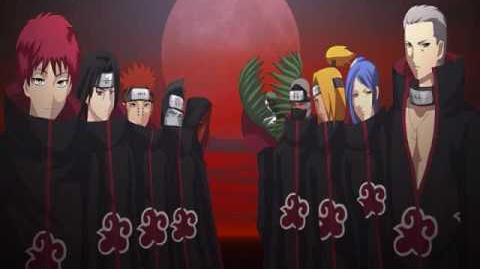 Retrieved from "https://villains.fandom.com/wiki/Akatsuki?oldid=3573104"
Community content is available under CC-BY-SA unless otherwise noted.