Villains Wiki
Register
Don't have an account?
Sign In
Advertisement
in: Spoilers, Mature, Kimetsu No Yaiba Villains,
and 56 more

Cure his father from his illness.
Protect his loved ones.
Kill Tanjiro.
Reach "Supreme Territory".
Find the Blue Spider Lily for Muzan.
Convince Rengoku to join the demons (all failed) or kill him (succeeded).
Become strong.
Kill those he deems weak.
Recruit those he deems strong (all succeeded until his death).
Apologize for being unable to protect his father, teacher, wife and reunite with them (succeeded).

Akaza is a major antagonist in the manga/anime series Demon Slayer: Kimetsu no Yaiba. He is a demon serving directly under Muzan Kibutsuji, and currently holds the position of Upper Rank Three of the Twelve Kizuki.

Over a century ago, Akaza was a human by the name of Hakuji before being turned into a Demon personally by Muzan. He serves as Rengoku's archenemy.

He first appeared as the final antagonist of Mugen Train Arc. and grew resentful towards Tanjiro because Muzan reprimanded him for being unable to take his life. Later, he fought Giyu and Tanjiro in the Infinity Fortress to his death, but not before he managed to recall his past and took his own life as an act of remorse and finally reuniting with his loved ones as his life fades away.

He is voiced by Akira Ishida (who also voiced Zeref Dragneel in Fairy Tail, Gaara in the Naruto franchise, Gabriel Miller in Sword Art Online, Regulus Corneas in Re:Zero − Starting Life in Another World, Hyoga in Dr. Stone, Ryuunosuke Uryuu in Fate/Zero, and Hideo Shimada in Parasyte) in Japanese and Lucien Dodge (who also voiced Toshikazu Hazamada in JoJo's Bizarre Adventure: Diamond Is Unbreakable and Mahito in Jujutsu Kaisen) in English.

As a Demon, Akaza took the form of a muscular young man with skin so fair that appears bright green-tinged white, decorated by a pattern of thick blue lines, which resemble the criminal tattoos he had as a human. The lines on his face curved through each of his eyes from below his ears to over his temples, another blue line running from the center of his hairline to the bridge of his nose, with two more lines running around his neck, three others branching off the lower one to his torso.

The center line ran directly down his chest to halfway down his stomach, and the other two branched off to the sides over each side of his chest to join the two other lines, this same three-line pattern there also repeating around his waist.

On his arms there were lines running down the front of his shoulders that ran into to two more, which went around his biceps, before continuing to run down to his wrists, below which it could be seen that each of his fingers is also dark blue with an orange fingernail, his toes also sharing this unusual appearance.

Akaza had short, bright pink hair that fluffed out around his head, and inward-tilting yellow eyes with pink eyelashes and blue sclera that looked somewhat like cracked glass, the kanji for "Upper Rank Three" etched into their irises.

He wore little, only sporting a short, sleeveless dark purple-pink haori that was cut off at his waist, left open to expose his chest, that was decorated by a square pattern on his back. Below this, he sported a pair of baggy white pants that he rolled to just below the knee with a blue rope belt to secure them at his waist. Akaza prefers to go barefoot, but wears a chain of large round pearls around each of his ankles.

During his human days as Hakuji, he had the same hair, just colored black rather than pink, and pale blue eyes with unusually-colored pink eyelashes. He was also very muscular as a human, and, on each of his forearms, he bore three black criminal tattoos.

He wore a dark blue-gray yukata.

Akaza is a stubborn, harsh, short-fused and bloodthirsty fighter who desires to fight the strong, respects the strong and loathes the weak. He also shares ill feeling for his colleagues and sees them as his own rivals, being especially hostile towards Kokushibou, the Upper Rank One, and Doma, the Upper Rank Two, who both held higher ranks than him. He shows a particularly strong interest in powerful opponents and will try to figure out their names as a form of respect towards them and their might. As a result, he remembered the names of every single opponent he fought in his life as a form of respect towards them.

In spite of his cruelty and wrath, Akaza had one special code; he never devoured any women, in spite of the fact that eating females would have actually made him even stronger, and Muzan gave him special permission to do so. He also showed a serious self-loathing tendency, valuing others above the good of himself.

All of his personality was influenced by his past life and the remnants of his own humanity, showing how dark and miserable his traumatic experiences were, to the point of being forced to become demonic and joining Muzan.

Before he became a Demon, Hakuji was born and raised by his father, who suffered from sickness. In order to pay for the medicine to cure his father, Hakuji pickpocketed the townspeople, three times, but sometimes got caught for his misdeeds. Beaten and given tattoos, they threatened to cut off his arms the next time he commits theft and was called a "Demon Child". Afterwards when Hakuji headed home after his third punishment from the town.

A villager informed him about what happened to his father, having heard about his arrest and later hung himself. In a letter his father sent to him, he stated that all he wanted was for Hakuji to live a full life without worry and didn't need to take the medicine if it was earned by dishonesty and misdeeds.

With the loss of his father, his criminal tattoos, and no home to return to. Hakuji was banished from Edo for his Theft. Devastated by his father's death and enraged at society for how he lived and couldn't afford the medicine to cure his father, he ends up picking a fight with other people he encounters and later beats them up.

However, one day later he beaten up seven men and nearly killed them off in a village, until he was soon approached by the village's dojo owner, Keizo. Annoyed by the owner's cheerful demeanor, Hakuji challenges the owner to a duel, but during the fight, he was defeated easily.

After the Duel, Keizo takes him in to his dojo, then introduces Hakuji to his daughter, Koyuki. Koyuki suffered from a sickness; her mother drowned herself due to the stress she had as Keizo had to work as a Handyman to keep things at balance. Keizo would later tasked Hakuji with taking care of her. But reminders of how he had a problem tending his father, Hakuji had problems trying to tend Koyuki. He did, however, find this awkward at first but till Koyuki burst into tears, crying because of his sickness. But Hakuji would indirectly motivate her by telling her that "there's always next year to see the fireworks".

As three years have passed. Koyuki was finally in good health, now willing to do the chores and could stand again. Hakuji on the other hand, continued training as Keizo's pupil of the Soryu style at the dojo. One day afterwards, Keizo offered Hakuji to take over the dojo and marry his daughter, Koyuki. Being embarrassed and surprised by this, Hakuji immediately agrees, now promising to protect both his master and his wife, even if the cost for it was his own life.

At the festival, he would later tell Koyuki about his troubled past and his father's death; then she asked if he was alright with the proposal, which reaffirmed Hakuji's vow to protect her for the rest of his life.

However, this vow was short-lived. Hakuji then took a visit to his father's grave and informed him of his marriage, but then he would quickly realize something was amiss from his return. A student from the dojo informs Hakuji that their rivaling kenjustu dojo, which had sought to Keizo's land for themselves and had prevented him from getting any students, had poisoned the well. Keizo and Koyuki drank the water from it, and the two died shortly, leaving Hakuji in despair, also causing his promise to protect them to be broken.

Enraged from the despair, Hakuji then immediately picks a fight with the rivaling kenjutsu dojo. He killed 67 members of the dojo with his own bare hands, pulverizing them one by one to the point where their corpses were unrecognizable. Because of this, it brought Muzan Kibutsuji's attention, but he would later feel disappointed that a human rather than a demon would commit such a gruesome act towards what Hakuji had done. Muzan then offers Hakuji to become a demon and a Member of the Twelve Kizuki, but as an Upper Rank. With nothing left to protect and having lost his will to continue living, Hakuji accepts Muzan's offer to become a demon under the name of Akaza.

After becoming a Demon, he lost all of his memories of when he was once a human, but now with only one desire: to become stronger, but despite never knowing why he wanted to become stronger in the first place. But as said by Doma, Akaza has refused to let himself harm or eat women or girls. Due to the strength he has now, Muzan would dispatch him for a special mission on finding the Spider Lily. And to this day, Akaza never remembered who he truly was. 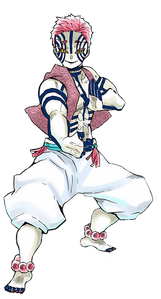 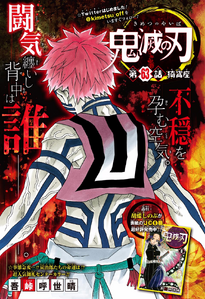 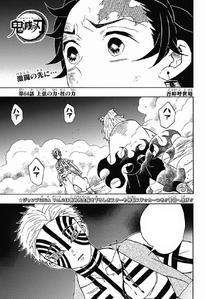 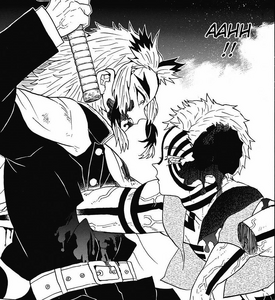 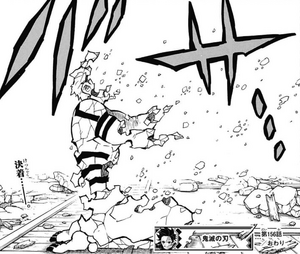 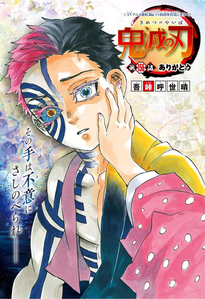 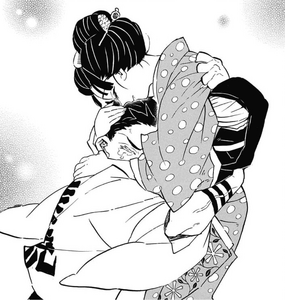 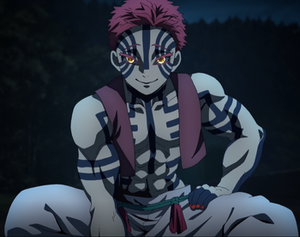 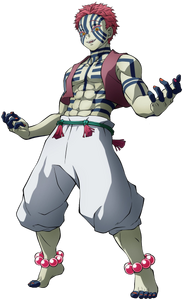 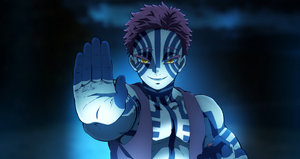 Akaza in the anime. 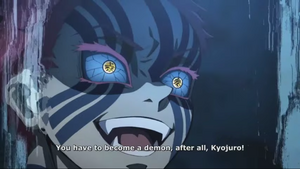 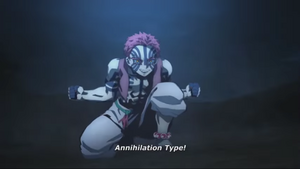 Akaza about to attack. 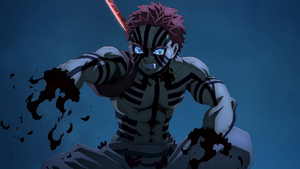 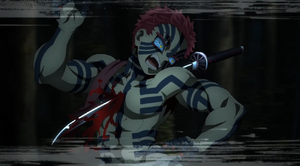 Akaza is struck through the chest by Tanjiro's sword. 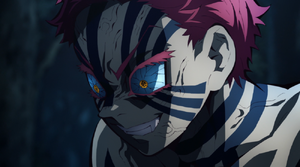