Villains Wiki
Register
Don't have an account?
Sign In
Advertisement
in: Mature, Call of Duty Villains, Deceased,
and 45 more

Commander of the Settlement Defense Front

Use the AATIS Guns to destroy the SATO Fleet and then sabotage the guns.

Kill himself so he can signal Salen Kotch to arrive on Earth (both succeeded).

Commander Akeel Min Riah is the secondary antagonist of the 2016 video game Call of Duty: Infinite Warfare. He is a sleeper-cell agent on Earth for the Settlement Defense Front and the second-in-command of Salen Kotch. He was sent to hijack Earth's planetary defense system and turn it against the S.A.T.O. fleet, annihilating it almost completely.

He was voiced by Jim Pirri in motion capture, who also played The Executioner in CWs Batwoman, and also voiced Grimbyte in Bunnicula, Clive Cross in The Amazing Deeds of Captain Wilkins, Rais in Dying Light, and Angelo Bronte in Red Dead Redemption II.

Riah was sent by the S.D.F. to pose as a mechanical engineer named "Michael Aaron Page" to gain privileged access to the A.A.T.I.S. Gun Systems during Fleet Week. Prior to his arrival on Earth, Riah underwent an operation that implanted a transponder in his abdomen.

is a sleeper operative and second-in-command for the Settlement Defense Front. He was the one responsible for turning the A.A.T.I.S. guns against the U.N.S.A. Fleet during the Fleet Week parade, destroying most of it with the acception of the ships Retribution and Tigris. Before he could destroy the A.A.T.I.S. Tower, which would incinerate his transponder and allow the Olympus Mons to invade immediately, he was taken into custody.

Later, S.T.R.A.T.C.O.M., under suggestion from Commander Nick Reyes, approved to have the transponder removed from Riah. However, Riah escapes and rips the transponder from his body, and dies of blood loss, allowing Kotch and the Olympus Mons to invade and destroy U.N.S.A. headquarters. Despite succeeding in his goal, Nick Reyes and his team would eliminate Kotch and end the stalemate against SetDef by destroying Mars' shipyard. 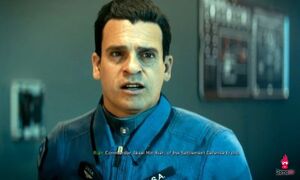 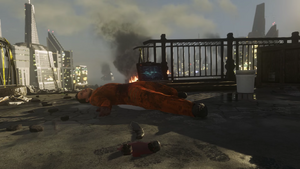