Going into town, presumably into bars to flirt and drink.

Keep Kayo with her.

Keep her abusive nature a secret (both failed).

Akemi Hinazuki is the secondary antagonist in the manga and anime series ERASED. She is the abusive mother of Kayo and keeps her from having any social contact, which leads to Kayo being both kidnapped and killed, She is also the grandmother of Mirai Sugita

She was voiced Akemi Okamura and Carrie Keranen in the dub, she is played by Tamae Andō in the live action and Noriko Eguchi in the drama.

Akemi has light-brown and somewhat messy hair. Her eyes are brown and she usually wears a red shirt with a yellow pullover above it. She wears simple grey pants and white slippers most of the time. Sometimes her eyes appear red. When going into town, she puts on red lipstick and wears a yellow trenchcoat.

Akemi was raised alone by her mother. She would later marry a man named Kazuo Takashima who would later beat her up badly, so she divorced him and kept her daughter Kayo. Since then she always physically abuses her so she has a lot of bruises on her body. In the morning she leaves her only a few coins so Kayo can buy a little bit of food for breakfast. Sometimes when she is angry at Kayo, she locks her in a shack outside, even when the temperatures are freezing. But she also occasionally dresses up a lot prettier to go out into town. She presumably visits locals to drink alcohol and hook up with random men.

Since Kayo tries to avoid coming home, she stays alone in the park after school until its dark. The abuse has made her anti-social and she has no friends. There she was being stalked. After beating Kayo, Akemi dunked her head into a cold sink filled with water, nearly drowning her. She did this so her wounds would heal quickly, since she would otherwise be found out. When she was locked up in the shack, the kidnapper broke in and killed her.

In another timeline, Satoru Fujinuma prevents her death and tries to uncover the abuse. He finds Kayo beaten and freezing in the shack. Akemi sees them and forces Kayo to lie to him, despite it obviously being manipulation. Satoru also gifts Kayo some gloves, since she has none, but Akemi quickly throws them into the trash. One time, Satoru and Kayo were walking home together, when Akemi saw them. She tried to slap her, but luckily Satoru's mother intervened. Despite having prevented the initial killing, Kayo was killed a day later due to being neglected again.

In the third timeline, Satoru calls his teacher, mother and the officials. They come to her house, but Akemi notices them and flees. Since they can't find any direct proof they leave. Eventually, Satoru and his friends corner her and expose all of it. His mother is also there and brought Kayo's grandmother, who is ashamed of Akemi. Akemi gets enraged and attacks Sachiko with a shovel. She avoids it and only receives a small cut. The grandmother takes Kayo away to live with her, while Akemi now defeated has permanently lost of all of her parental rights and is left behind crying and screaming, possibly to be arrested, Akemi is never seen nor heard from again after that. 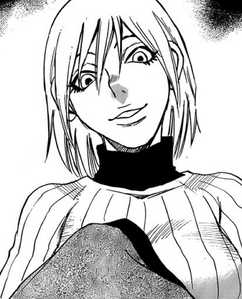 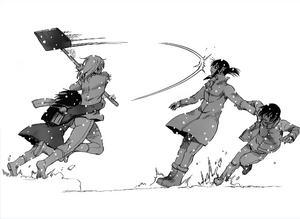 Akemi attacking Sachiko in the manga.

After divorcing her husband and raising Kayo alone, she became extremely crazed and downright psychotic. While she used to be caring before, she is now cruel, sadistic and heartless towards her daughter. She constantly beats her for no reason and doesn't even cook for her. Yet she is still obsessed with her and gets angry when someone takes her daughter away, she is shown to be a coward as in her fleeing from the officials.