Akhenaten is the main antagonist of the comic miniseries Marvel: The End by Jim Starlin.

Instead he decided to use his newfound godhood to destroy all the gods and heroes of Earth in order to rule it as a supreme being, in such that even the asbracts such as Eternity and Infinity could not do anything against him.

Ironically it was Thanos who would come to Earth's aid and through the use of the Heart of The Universe easily defeated Akhenaten.

The Heart of the Universe gave Akhenaten Vast cosmic power to manipulate energy, matter and reality, travel through time, pierce dimensional barriers, make large groups of heroes disappear with a nod, kill a whole gathering of skyfathers with a energy blast, near omniscence and superhuman senses. 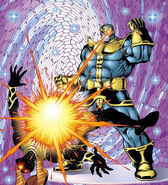