AKI is one of the main antagonists of the 2017 Syfy original series Blood Drive. She is an artificial intelligence designed by Heart Enterprises, an evil corporation that rules the world in the dystopian "distant future" of 1999, after a massive earthquake caused a series of massive chasms to open. Aki says that a glitch in her programming made her sentient, giving her a "human-like" personality. She becomes Chris' nemesis during the series, and an entire subplot is dedicated to her torturing him in various ways.

She is portrayed by Marama Corlette.

After Officer Arthur Bailey is kidnapped by a murderous ringleader named Julian Slink and forced to participate in a violent race to the death in which cars run on human blood instead of gasoline, Bailey's partner, Christopher "Chris" Carpenter, begins investigating his disappearance, and is placed on involuntary leave by his lieutenant, as she blames him for Bailey's kidnapping. While he is in the locker room, Aki approaches him disguised as a coworker, and proposes to help him find Bailey. Chris and Aki's investigation leads them to an underground sweatshop where numerous homeless people are tied to tables while being exsanguinated, so that their blood can be used as fuel.

Chris finds a table with his name on it, and realizes that Aki is the one who is draining their blood, and that she intends to do the same to him. He pushes her, and she is impaled on a pipe, causing her to bleed a colorful substance before facetiously remarking "you got me wet." Chris tries to run, but a duplicate of Aki appears in the doorway and knocks him unconscious by punching him in the eye.

He wakes up, blind in the eye she punched him in, and introduces herself truthfully this time, explaining her role in Heart Enterprises, and proceeds to spend the next three episodes psychologically and physically abusing him in increasingly sexual manners, supposedly to "condition" him in working for Heart Enterprises.

Aki has several conferences, one with a man named Mr. Skuttles, who she hires, but he is murdered by Julian, who thinks he stole his job. Aki laments that she just had the lobby cleaned. During her conference with Slink, she tells him that she was going to murder him, but thinks that he may actually be valuable to her company's executives after seeing how passionate he was to lead the Blood Drive. Slink insists on speaking to a higher executive, but Aki assures him that he isn't worthy of their time, as he is barely worthy of hers.

After Aki surgically gives Chris a mechanical eyeball, she forces him to work at Heart Enterprises to pay off the surgery's cost of over $2 Billion. He works as a mailman and a security guard, while attempting to gain more information on Heart Enterprises and contact his partner Arthur. Eventually Chris finds Aki sexually stimulating his lieutenant, and angrily confronts them. His lieutenant admits to being in league with Heart Enterprises, and in a fit of rage he kills her. A confused Aki explains that she had several more levels of torture scheduled before he was expected to be capable of murder, and he admits to loving her, causing her algorithms to change and allow her understand human emotions. Aki beings to feel remorse for her actions and frees Chris.

Towards the end of the season Chris, and Aki, who has now gained sentiency, are recaptured by Karma D'argento, who is revealed to be the true mastermind behind the Blood Drive. Chris, who is forced to watch footage from the conclusion of Blood Drive, witnesses Arthur attempting to murder him, and demands to be given all of Heart's upgrades so that he can get revenge on his former partner. Arthur, Grace, and Julian arrive to destroy Heart's headquarters, and Aki and Chris are freed from their captivity to kill them. As Julian begins planting bombs near a support beam, he is confronted by Aki, who says he can't destroy the building as long as Chris is inside of it. Julian ignores her, and reveals that he was originally an android, and was the prototype version of her, but was deemed a failure due to his sadism and sentience. Aki kills Julian by severing his spine and leaves him to die, but not before he is able to detonate the explosives. Aki finds Chris, who had been impaled to death by Arthur in self-defense, and begins crying over his corpse as the building collapses, presumably killing her, Grace, and Karma.

Chris wakes up at Heart Headquarters. 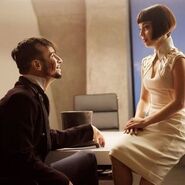 Aki in a conference with Slink.