Blackmail Hiroko into getting low marks

Aki Honda is a villainess in the manga and anime series Narutaru (Shadow Star).

Aki Honda was the leader of a gang of middle-school bullies whose favorite victim was Hiroko Kaizuka , whom they often tormented out of jealousy for her high grades, which skewed the class's performance numbers against them. Aki was such a terror, boys in the class feared her, and one member of her group often faced as much bullying as Hiroko herself, for merely expressing mild opposition to some of what they did.

Hiroko was caught in a double-bind: If she didn't have the best grades possible, her parents would put relentless pressure on her; If she did get good grades, Aki and the others would not only move against her, but regard raising her grades as defiance. Hiroko's best friend Shiina knew almost nothing of this torment, nor of Hiroko's added burden of past sexual abuse by her father. Aki and her gang, Mihaya Ozaki (a Heathers-like follower of a Queen Bee), Hiroka Takamura (an almost stereotypical school bully/henchperson), and Miyoko Shito (the one most nervous about what they were doing, and also one of main series' character Shiina Tamai's friends) rarely missed an opportunity to further ruin Hiroko's life at school.

The most notable torture the gang inflicted was forcing Hiroko to eat worms, and then raping her with a test tube, an event Miyoko was beaten for because she was too late to join in. A boy that was friends with Hiroko managed to stop her from continuing, but kept quiet because of his fear of the increasingly brazen Aki. Later that day, the torment reached its zenith when her father, convinced that her friend Shiina was the cause of her bad grades, forbade Hiroko from seeing her. With the one person she loved forced out of her life by her parents' strictness and Aki's monstrous behavior, Hiroko at last snapped.

Murders began to happen in the area. Mihaya was found dismembered in an alleyway. Hiroko's parents were murdered in their apartment. Aki was in her apartment, laughing about her attacks on Hiroko and plotting still more, with her brother (and implied lover) Yashuhito. A monster, apparently a Shadow Dragon like the ones used by Shiina and her associates, broke through the wall, instantly taking half of his head off. Pinning Aki to a wall, the monster morphs one of its fingers into the shape of a test tube, allowing her just enough time to realize the monster has a connection with Hiroko. It then uses the finger to rape her, followed by forcing her to ingest worms. The anime version of this scene ends with the shadow of Aki having her stomach pierced by the monster's talons and then her body falling to. The unedited manga, never released outside Japan, explicitly shows Aki being split in half by the talon's rape, and her remains afterwords. The dragon, called Oni, goes on to kill Hiroka, and maims Miyoko, sparing her only because of her expression of last minute regret for the gang's actions. When the monster tries to kill Shiina's father (viewed by Hiroko as an obstacle to her and Shiina being together), Shiina and her dragon are forced to kill a now-insane Hiroko. 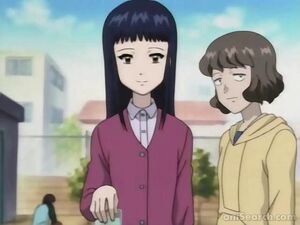 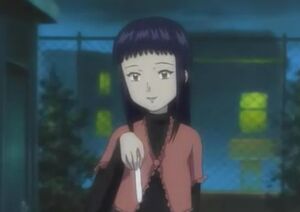 Retrieved from "https://villains.fandom.com/wiki/Aki_Honda?oldid=3612466"
Community content is available under CC-BY-SA unless otherwise noted.