Make ghouls the dominate species and help them overthrow humanity.

Turn Humans into One-Eyed Ghouls to escape their "birdcage".
Destroy the CCG.

He is a physician at Kanou General Hospital and is the character responsible for turning Ken Kaneki into an Artificial One-Eyed Ghoul. He was a member of the Aogiri Tree despite being a human, and an associate of the Clowns, helping them by creating artificial ghoul soldiers.

He was voiced by Kenji Nomura in the Japanese version and Mark Stoddard in the English version.

Kanou appears to be a middle-aged man with the typical attire of a physician with a white coat, white shirt, and black necktie. He has grey hair and tends to smile at his patients. After the timeskip, he is sometimes seen wearing a Hawaiian shirt and carrying a fan with him.

At first glance, Kanou appears to be a kindhearted and gentile physician. He shows care for his patients and wants to make sure their life is saved and is even willing to go as far as breaking rules and regulations. This however, is nothing more than a false image. In reality, Kanou is a dark and cruel individual who is obsessed with turning humans into ghouls. He views humanity as a weak and inferior species that must be freed from their "birdcage" and the only way to do that is to make them all into ghouls. He is amoral as he views human-ghoul experiments as stepping stones for his goals and loves them, not caring what measures he has to take in his experiments. He seems to hold a sadistic pleasure in it as well, such as when he tricks Takizawa into consuming his own parents and when he mocks Kurona Yasuhisa for her belief that her sister is alive.

While Kanou holds humanity in contempt, he does hold genuine respect towards humans for their abilities. One person he respects is Dr. Kouitsu Chigyou for his modification and refinement of the kakuhou transplant surgery to create the Quinx. After he successfully created Dragon, he announced that the "cage had been broken" and shot himself at his mother's grave when confronted by Kurona.

When he was young, Kanou was a very happy and cheerful child you loved to make other people laugh. His mother became ill and was sickly during his childhood and he is said to have visited her every day in the hospital. Right before he entered into an unknown university, his mother had died and this caused a major change in him. As a student of Teihou University, he enrolled in its School of Medicine and graduated at the top of its class and traveled to Germany to do research and worked with the GFG. He spent three years at the GFG in its lower ranks before joining the CCG and working with the organization for four years. During his days researching, he researched ways to integrate the bodily capabilities with a ghoul with the body of a human which faced criticism over ethical concerns. His project was forcibly terminated over this and was forced to resign in disgrace.

Kanou is first seen after Kaneki gets wounded from his encounter with Rize Kamishiro the night before. He secretly transplants her organs into him and sees Kaneki after the surgery awake and alive. He asks Kaneki how he's doing and observes Kaneki noticing his new ghoul features. Later on, there is a scandal as Kanou transplanted Rize's organs without the consent of her family.

After Kaneki is released from the hospital, Kanou sees him on a regular basis for medical check-ups and provides Kaneki the needed medication. Kaneki then asks himself if Kanou knows about his current condition since his RC Factor should've risen up by now.

It is then revealed later on that Kanou is both aware of and responsible for Ken Kaneki's newfound state as stated by Tatara. Kanou had secretly transplanted Rize's Kakuhou into Kaneki under the guise of transplanting a kidney. This fact is reiterated later by Yamori as more reason to torture Kaneki. Kanou then escapes from Aogiri's clutches and flees into hiding. In the Root A anime, he observes the destruction of the Aogiri's base from the hospital roof and tells the Yasuhisa Sisters to leave with him once they're done seeing it fall.

Sometime later on, Kanou becomes a target for the CCG, The Aogiri Tree, and Kaneki's Group all at once as all three organizations go out on a massive manhunt and search for the mad scientist. During the raid on his laboratory, he and Kaneki meet up again where Kanou tells Kaneki his evil plan all along. Kanou confesses that he had always felt that humanity was stuck inside a "birdcage" and he wanted to "free" them by turning them into ghouls. He then told Kaneki that he views him as his ultimate creation. Kanou then admits that Yoshimura is the reason for the creation of Aogiri and tries to convince Kaneki to join him and the Aogiri Tree so he can show the world his "true form".

This causes Kaneki to accept the deal but right before he can join Aogiri, Yomo comes in and rescues Rize and tells him to come with him as CCG Soldiers had started to arrive and breach the building. Kaneki escapes with Yomo and Kanou escapes with Matasaka Kamishiro but not before telling Kaneki that he looks forward to seeing him again. Afterwards, he oversees with Eto a fight between Koutarou Amon and a deranged Kaneki and is leaving when he comes across Kurona. He confirms to her that he's joined the Aogiri Tree and tells her to leave behind Nashiro and that she'll make new friends in Aogiri. Kurona rejects and Kanou leaves with Shachi and has the two twins stay behind who's statuses remain unknown.

In the devastating and bloody aftermath of the CCG's 20th Ward Operation, Kanou appears again where he has been given a brand new laboratory and is accompanied by Eto and Tatara. He then tells them how Investigators have stronger bodies then regular humans and thanks them for providing the needed materials for future experiments and brand new Artificial One-Eyed Ghouls in the future. Kanou then admits that Kaneki was only a procedure and that he turned out to be far greater and better than he had anticipated. Eto then tells him that Kaneki is gone and that they should have a "New Kaneki" made using the organs of Yoshimura.

Three years later after the timeskip in Tokyo Ghoul:re, Kanou is seen still alive and remains a member of the Aogiri Tree. He is with Eto during the Auction where the two of them overlook the event happening from a building nearby and observe everything happening from a distance. He is seen in a room full of monitors where he watches the CCG Forces break into the main hall and storm the compound. He then tells Eto that it's time to send in "The Owl" and the first new artificial ghoul is revealed to be Seidou Takizawa who gets deployed to the building.

He is seen tailing with Naki about his late bodyguards Gagi & Guge where he asks him if he can use the twins' kakuhous in his experiments to create future artificial ghouls. Due to Naki's lack of proper education, he simplifies what he's saying and says that he will be able to "revive within a sense" the twins which makes Naki happy and shares his joy with other members of the White Suits. Kanou then ponders over the Quinx Squad as he has taken an interest in them, he complements doctor Kouitsu Chigyou and hopes to have a conversation with him, and then wonders what his beloved prototype Ken Kaneki is currently doing at the moment.

In the aftermath of the CCG's Extermination Raid against the Tsukiyama Family, the Investigator Ginshi Shirazu is killed and his corpse is captured by the Aogiri Tree. His corpse is then handed over to Kanou where he examines the body and finds himself to be rather impressed on how the CCG was able to take a ghoul's kakuhou and put it into the body of a human through Frame Technology. He's certain with the body of the late Quinx,he'll be able to use his remains in his experiments and the success rates will be higher because of such a discovery. Kanou then asks Tatara to get a new body for him and he wants to speak to Eto but Tatara says that he's "busy".

Kanou is seen on Rushima Island, the current headquarters for the Aogiri Tree, where he is stationed in a laboratory based somewhere on the island. He's seen again where his former underling, Kurona, appears and she demands he revive her sister Nashiro whom she claims is a parasitic entity deep inside her body and shows her the face on her lower torso. Kanou states that it's just farts and that in reality, Nashiro was dead all along and Kurona actually devoured her. Furious, Kurona then states her intentions to kill Kanou but he ends up releasing Okahira, a former ghoul investigator turned creation and underling of Kanou, and has the two of them fight to prove who's superior.

Kanou orders Okahira to attack and kill Kurona but she ends up using a steal pipe and blasts steam at him which kills him as well. Kurona mention how there was a similar tragic incident that involved steal pipes in which the pipes malfunctioned and incinerated an entire group of researchers and claimed that it'll happen again. Kanou then unleashes an entire army of batches of Quinx that he has made and asks what would they think. Kurona fights off the Quinx and she manages to escape them before running out of energy and being overrun and lunges at him in an attempt to kill Kanou once and for all when all of a sudden, Nishiki Nishio shows up and grabs him with his kagune and Kanou greets him with a delightful smile. Eventually however, Roma Hoito and Shikorae arrive and save him and he manages to escape with Okahira. Kanou is then seen gathering his resources and remaining experiments as well as his assistant, Kimi Nishino, and plans to escape and get off of Rushima Island to escape CCG custody as the Aogiri Tree has been destroyed and all remaining survivors, mainly Aogiri members, are also getting off as well.

Although Kanou is a mere human, he does posses abilities which are vital to the Aogiri Tree. He is an expert surgeon and he has the ability to turn humans into Artificial One-Eyed Ghouls which are more powerful than typical average ghouls in general. He is also extremely intelligent and very resourceful. Kanou is also rather manipulative as he can put on a false image for his patients like Kaneki and he even almost convinced Kaneki to join him and Aogiri had not Yomo interrupt him. He's also loyal to the cause of Aogiri and is trusted to be a member of the organization and he's become one of Aogiri's most important members due to his work. Kanou is also able to breed an army of Quinx soldiers as seen during his fight with Kurona and currently has control over his own private Quinx army. 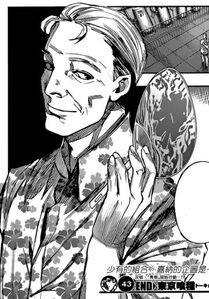 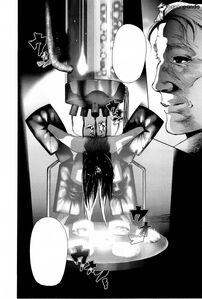 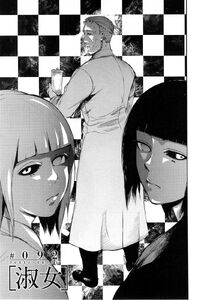 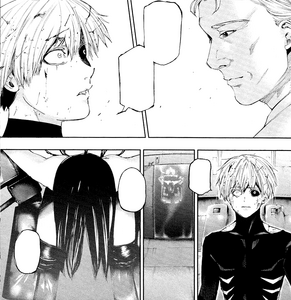 Kaneki confronted Kanou before finding Rize in his lab. 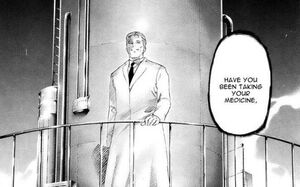 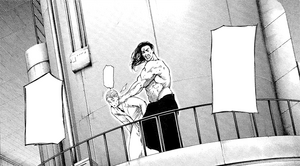 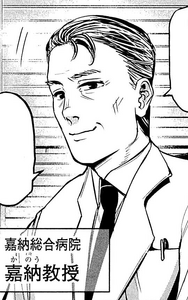 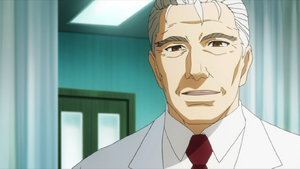 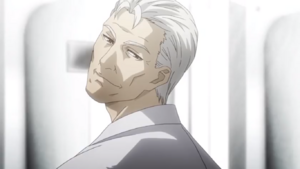 Kanou in the :re anime. 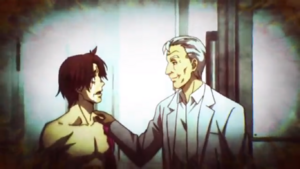 Kanou reveals that Seidou is a ghoul. 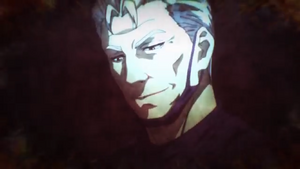 Kanou tortures Takizawa.
Add a photo to this gallery

Retrieved from "https://villains.fandom.com/wiki/Akihiro_Kanou?oldid=3759925"
Community content is available under CC-BY-SA unless otherwise noted.