Patriarch of a major yakuza family

Hanging out with Kiryu.
Climbing through the Tojo ranks.

Prevent Sohei Dojima from gaining the Empty Lot.
Help Kazuma Kiryu clear his name from the Empty Lot murder (all succeeded).
Kill Kiryu to spare him from a life of possible eternal torment in what is known as "The Hole" (failed).
Acquire the stolen ten billion yen and become chairman of the Tojo Clan (failed).

Akira Nishikiyama, also known as Nishiki, is the main antagonist of Yakuza and its remake Yakuza Kiwami and the deuteragonist in Yakuza 0. He is the first patriarch of the Nishikiyama family and is the sworn brother of Kazuma Kiryu. In the spin-off Yakuza Ishin, Nishikiyama appears as an antagonist and takes on the role of the Japanese samurai Okada Izo.

Nishikiyama grew up in Sunflower Orphanage alongside Kazuma Kiryu and Yumi Sawamura. At the age of seventeen, Nishikiyama and Kiryu decided that they would become yakuza and joined the Dojima Family, after their foster father Shintaro Kazama beats them up out of disapproval of their actions, despite being yakuza himself.

Set in 1988, Yakuza 0 explores Kiryu and Nishikiyama's friendship before everything changes in Yakuza. Nishikiyama was involved in the Empty Lot incident. One time, Nishiki drives Kiryu to an empty spot in the woods. He offers his sworn ally his last smoke and attempts to kill him because he doesn't wish Kiryu to die a horrible death, but couldn't bring himself to shoot him and lets Kiryu go. He assists Kazuma Kiryu and prevents him from beating Keiji Shibusawa to death, telling him that it's not worth it, and if he were to eventually "cross that line", they would do it together. Ironically, this is not the case later on.

Seven years after the events of Yakuza 0, Nishikiyama and Kiryu are continuously rising up the Dojima ranks, with Kiryu's ascension being much more rapid due to his actions in Yakuza 0, gaining him the name "the Dragon of Dojima". Nishikiyama casually admits his jealousy towards Kiryu, but this jealousy would be a factor that turns Nishikiyama into a different man. On a stormy night, Sohei Dojima, patriarch of the Dojima family, kidnaps Yumi and tries to rape her. Nishikiyama follows them and ends up murdering Dojima. Kiryu arrives onto the scene and willingly takes the blame, and serves ten years in prison. While Kiryu is in prison, Nishikiyama goes through a tragic series of events, one being the death of his sister Yuko Nishikiyama. After Kiryu is released from prison, he learns that Nishikiyama is no longer the man he once knew. Kiryu sees this for himself as Nishikiyama calls him over to a bar that they used to hang out in. Nishikiyama offers Kiryu a chance to join him and work alongside him in exchange for a girl named Haruka Sawamura, which Kiryu has been taking care of. Kiryu refuses, and Nishikiyama ends their brotherhood there. For the rest of the game, the Nishikiyama family continues to antagonize Kiryu. Nishikiyama himself is not seen again until the end of the game, where Kiryu and Nishikiyama engage in their final battle. In the end, Kiryu is victorious, but was nearly killed by Kyohei Jingu. At last, Nishiki decides to be the man that Kiryu once knew by stabbing Jingu, before both he and Jingu died.

Even after Nishikiyama's death, the Nishikiyama family continued to cause problems for Kiryu, with each new patriarch being more horrible than the first. The family would finally disband in 2009 when Tsuyoshi Kanda, the third patriarch, died at the hands of Yoshitake Mine.

In Yakuza 6, Kiryu can capture images of Nishiki's bloody ghost in places like Serena.

Before Yakuza, Nishikiyama was a model modern yakuza, and he often made fun of Kiryu for being old-fashioned and not getting in with the times. Despite this, Nishikiyama was very loyal to Kiryu, as seen when he takes on Goro Majima in order to protect Kiryu. Nishikiyama was also very popular with the ladies, which he only did in order to gain the respect of higher-ups. After Nishikiyama's transformation, he becomes a cold, ruthless person. He has no problem with killing off any disobedient family members. He is also very manipulative, as he uses a woman's love for him to his advantage in order to give away Kiryu and Haruka's position, then later sends goons to kill her. He hates being called useless or being compared to Kiryu, which is what sparked his transformation in the first place. 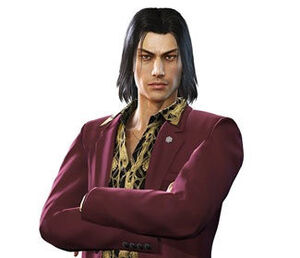 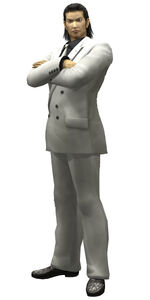