Akira Otoishi is a major antagonist of the fourth arc of JoJo's Bizarre Adventure, Diamond is Unbreakable, acting as the main villain through the first half of the arc.

Akira was one of the many people Keicho Nijimura shot with the Bow and Arrow while trying to find a stand user capable of killing his mutated father.

Akira was one the many lucky ones to develop a stand after which point he became interested in them and how to create them. To further his goal on studying them he needed the Bow and Arrow which he forcefully took from Keicho leading to Keicho's death. From there on he tormented several people, among them Josuke while trying to improve in the use of his guitar skills.

Jotaro claimed him to be a threat and searched out a way to find the location of his person as his stand allowed him to interact with others by electricity from a distance. For this Jotaro called on his grandfather Joseph Joestar. Immediately Akira discovered their plans which lead to a short skirmish between Okuyasu in which he discovered that Red Hot Chili Pepper, Akira's stand, had a time limit, as when not reserving enough electricity it grows weaker.

Using this to his advantage Okuyasu savagely beat the stand before he accidentally opened a hole within the floor which lead to a power-line. Using this Akira reabsorbed enough energy to defeat Okuyasu. During their next confrontation Akira personally showed up as he was wanting to kill Joseph. He believed Josuke to be an easy match, underestimating the youth which lead him to his defeat, even after this Akira used his last power to teleport himself to the boat that Joseph was on disguising him as a Speedwagon Foundation operator.

Okuyasu, acting as the bodyguard for Joseph, saw this and prepared to attack him but Akira confused him by saying the other SPW Foundation operator was the real Akira. Okuyasu, not used to brainwork, punched the first member lucky striking Akira.

He was later put on trial with a sentence of three years behind bars with no bail or parole for the things he had stolen. It was there that Jotaro confronted him saying that if he tried to escape he and Josuke would hunt him down to the ends of the earth.

Akira's stand, Red Hot Chili Pepper, acts as a living battery, being able to absorb electricity within it's body and use it freely. It is also capable of traveling through electricity wires as far as he can go, never losing it's power even when far away from it's user. If it absorbs it's maximum capacity, it begins shining and becomes intangible. However, it's highly vulnerable to water, causing it to lose all of it's power and disable Red Hot Chili Pepper, plus severely weaken it with a rusty look. 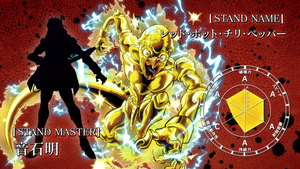 Red Hot Chilli Pepper
Add a photo to this gallery

Retrieved from "https://villains.fandom.com/wiki/Akira_Otoishi?oldid=3447544"
Community content is available under CC-BY-SA unless otherwise noted.