Licking his lips (before losing to Nagisa).

Abusing his "families".
Scratching his face until it is scarred (after losing to Nagisa).

Train students of class 3-E to kill Korosensei and take the credit for himself.

Kill class 3-E students for humiliating him.
Prove his worth by surpassing Karasuma.
Kill Nagisa Shiota (all failed).

Akira Takaoka (鷹岡 明) is a major antagonist in the manga series Assassination Classroom and the main antagonist of the first season of its anime adaptation. A trained soldier-turned-teacher, he was initially introduced as a very kind and helpful educator, only to be later revealed as a thuggish disciplinarian who abuses his strength and power through brute force and violence.

He is voiced by Kenta Miyake in Japanese, and by Justin Cook in the English dub.

Akira Takaoka was a career soldier who, like his rival Tadaomi Karasuma, belonged to JGSDF 1st Airborne Brigade before transferring to Defense Intelligence Headquarters (DIH), a military branch under Japanese Ministry of Defense (JMOD) until his transference to Temporary Specialty Branch, a unit founded by JMOD specifically to kill Korosensei (after Korosensei died the branch dissolved). While looking for ways to best his rival, Takaoka found that to become a teacher at Kunugigaoka Junior High School Class 3-E would be the way to do it.

When Takaoka and Karasuma were in the same airborne brigade in the army they were in different section once they each became drill instructors in their respective units. Knowing Karasuma's talents, Takaoka has always been envious of Karasuma as the latter always produced the better results. Takaoka wanted to prove his worth, to take credit for the assassination of Korosensei, and have Karasuma become his underling.

What Takaoka failed to realize was, that everyone in the brigade envied Karasuma for being the best but Karasuma was a diligent man who never failed to strive for the best in addition to his own innate talents. Plus, Karasuma never forced training that are way beyond his students to handle and adjusted the intensity of training to the level of ages of his students. Karasuma also never forgets to give his students advice. So while people were jealous of Karasuma they acknowledged him. Takaoka however, unilaterally imposes his methods on others, never thinking whether his students can handle the intensity of his methods or not. So instead of acknowledging his own flaws that produces counterproductive results, he blames Karasuma for his own shortcoming, indicating that Takaoka fails as an educator.

He first appeared as a P.E. teacher for Class 3-E when he was sent by his military superiors when they became impatient with Karasuma and his students' slow progresses and their repeated failures to kill Korosensei. Takaoka appears to be a nice person, giving the students food, drink, and even sweets. And it is due to this friendliness Takaoka quickly became popular with class 3-E students. Seeing Takaoka seemingly getting along very well with class 3-E students, Karasuma begins to have a serious pondering whether he has failed as a mentor. Then his female comrade, Suzume Sonokawa, informs Karasuma that Takaoka is very dangerous. There are two pictures of Takaoka training his soldiers present to Karasuma. The first picture seemed fine yet Karasuma suspected something is not quite right. Sure enough, Karasume sees a second picture of Takaoka showing his 'previous family', trainees who are scarred on their backs, having suffered abuses by Takaoka.

As the second picture revealed, Takaoka's smile is later revealed to be a facade as he is in actuality abusive thug who gives Class 3-E a strict and harsh training schedule with no chance of studying, imposing his students who are in their early teens with training level of elite special force. It is also revealed that Takaoka's goal is to become a hero who produced heroes that killed Korosensei. To this end, he sees his students nothing more than tools to achieve his goal and does not care about the students' welfare at all. Only thing Takaoka cares about is gaining fame from them killing Koro-sensei due to his teaching, as well as forcing Karasuma to acknowledge his methods and being able to boss him around.

After attempting to punch a student named Hinano Kurahashi who calls Karasuma for help, Karasuma, having enough of Takaoka's counterproductive ways of 'teaching', intervenes. Anticipating this, Takaoka decides to make a bet that if one of the students Karasuma selected stabs or pokes Takaoka with a knife, he will entrust students back to Karasuma and leave the school. Otherwise, Karasuma has to allow him to follow up with his hellish training with no objections. However, Takaoka makes the chosen student use a real knife, knowing he will have the upper hand as he knows his opposing student never held a real knife before. Nagisa is selected by Karasuma to fight him, and Takaoka mocks Karasuma for his choice to entrust the task to whom Takaoka considers the weakest among the students. Takaoka intends to pummel Nagisa so badly that other students would then fearfully listen to him and never dare disobey him. Additionally, Takaoka wanted to see Nagisa's despairing express should he loses. But defying his expectation, Nagisa defeats him with a special assassination technique he had been taught with. He tried to force Nagisa to fight him again, but when Nagisa politely refused, the enraged teacher charges at the student until Karasuma knocks him down. The chairman, Gakuho Asano, was disgusted of Akira's methods and fired him.

He later returns as the true mastermind of the Island arc. After he left the school, Takaoka was mocked daily by his upper-class superior that he lost to a teenage boy. Unable to deal with the humiliation, he embezzled the office funds and hired professional assassins to poison the students of class 3-E. He poisons half of the class using a lethal self-engineered virus. The remaining students sneak their way into his hotel, where they gradually defeat several of his guards and the three professional assassins he had hired.

Upon arriving at the room where Takaoka is hiding in, Takaoka reveals himself to the class, and he forces the class to follow him to the roof and onto the heliport, where he challenges Nagisa to another one-on-one duel. Before they fight, however, he blows up the stairs to prevent the rest of the class from following, and he forces Nagisa to apologize. Despite this, he blows up the antidote used to cure the students while laughing insanely, enraging Nagisa and Nagisa vowing to kill Takaoka. Nagisa and Takaoka then fight, and while Takaoka initially gains the upper hand, Nagisa uses his new technique to take Takaoka down, and it was later revealed that his hired assassins gave the students a fake poison when he revealed that he had no intention of curing the students at all; in fact, if he had killed Korosensei and got the reward, Takaoka intended to purchase other junior high kids every day and force-feed the lethal virus to them. This psychosis proved too much even to hardened stomachs of the three hired assassins.

Takaoka was later arrested and interrogated by the military.

In a perverse rationality stemmed from his own bias, Takaoka firmly believes that by connecting with his trainees (in military)/students (in school) as a tightly-knit family and standing as a tyrannical father who instills fear at the same time, he will be able to produce elite and loyal men in a short span of time: a view Korosensei (although Korosensei do not agree with Takaoka's belief, he acknowledged Takaoka's opinion as one of ways for education), his rival Karasuma, and even Gakuho Asano, obviously do not share.

Giving his class 3-E students foods and sweets at the beginning, he understood the concept of 'carrot and stick'. But compared to his brutal stick, his carrot was so much lacking. 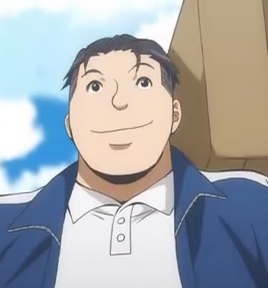 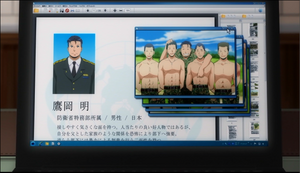 Takaoka in a picture with his students... 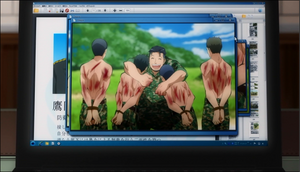 ...and a foreshadowing of his true nature. 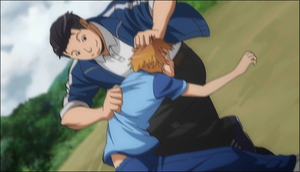 Takaoka kneeing Maehera when he protested his new schedule change. 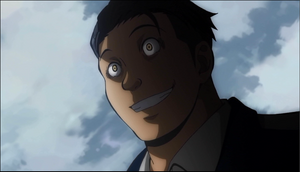 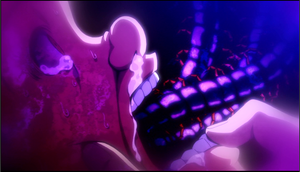 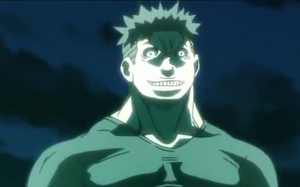 Akira Takaoka in the Fight against Nagisa.