Akron is the main antagonist in Epic Battle Fantasy 3 and Bullet Heaven 2.

A ancient deity, Akron was summoned by Godcat during the early years of the Earth after the cats' civilization crumbled through their friendship with humankind. Akron ruled over the world until he was sealed away by the warriors of the land inside Volcano Peak.

Gaining a mythical status, Akron soon faded into the background of the world until Matt, Natalie, and Lance discovered its legend and decided to kill the beast to boost their own glory. Following Matt foolishly awakening it, Arkon made most of their abilities inaccessible through manipulating reality before they were sent to The Town through the rift in space and time. This event caused the heroes to go on their quest, both to regain their powers and properly slay the beast.

As the adventure continues, Akron regains his strength, causing the monsters of the land to go berserk and himself to cause natural disasters en mass. Rumors of his return caused other adventurers to seek Akron themselves, only to be slain by his effects on the world or Akron himself. Any who survived instead helped our main trio to get to the beast themselves.

Returning his now warped tomb, Akron challenged the heroes to one more duel, with this time having the heroes finally end his reign of terror.

Akron is likely one of the most powerful enemies in the Epic Battle Fantasy series (next to Godcat and The Devourer). He possesses a variety of dangerous magical abilities, chief among which is his ability to change his elemental affinities at will. The large gem on his torso indicates which element he has shifted to, and players can track his new resistances and weaknesses by using Lance's "Scan" ability on Akron, the boss only needs to be scanned once, no matter his form.

Offensively, Akron can cast numerous powerful spells, mainly taking the form of beams or generic magic available to the players. As seen in the prologue, he can drain the powers of his foes to increase his own strength. A NPC in the final area of the game speculates that Akron drains his victims' souls to do this. He can summon lesser enemies to his side, including his signature Rune Claws (floating metal pincers animated by a red orb of energy in their centers) to assist him with healing/support spells and elemental attacks of their own.

After taking some damage, Akron can also switch to his second form, a massive, monstrous face with a gaping mouth. This form mainly attacks by releasing various weapons and creatures from its mouth, including an enormous blade of energy, Evil Worms (demonic, sandworm-like beasts that attack independently of their spiky tails), and a gigantic sphere of dark energy that has a small chance to instantly kill its targets. 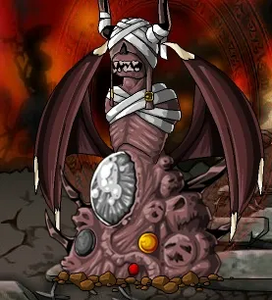 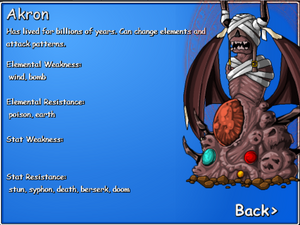 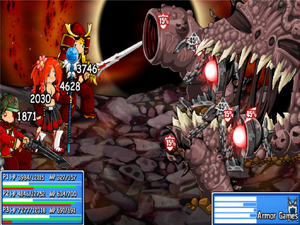