Akron is a final boss in EBF3. He is an ancient demonic deity summoned by Godcat that has lived for billions of years. He used to rule over much of the world but was eventually defeated by other gods. Unable to destroy him, they bound him in his prison and forced him into a deep sleep. He was awoken by Matt, Natalie and Lance, who heard about the ancient evil and came to destroy it. They approached the demon's tomb and poked it. The deity then proceeded to sap their life energy, though they managed to survive. However, by now, the demon's powers were so dense, that time and space began to distort itself in his presence. The resulting rift hurled the heroes to a place only known as The Town. While they traveled seeking revenge, Akron spent its time trying to recover from the curse. Eventually the heroes arrive and defeat the weakened Akron.

Akron is likely the second most powerful enemy in the Epic Battle Fantasy series (next to his creator, Godcat). He possesses a variety of dangerous magical abilities, chief among which is his ability to change his elemental affinities at will. The large gem on his torso indicates which element he has shifted to, and players can track his new resistances and weaknesses by using Lance's "Scan" ability on Akron - the boss only needs to be scanned once, no matter his form.

Offensively, Akron can cast numerous powerful spells, mainly taking the form of beams or generic magic available to the players. As seen in the prologue, he can drain the powers of his foes to increase his own strength - a NPC in the final area of the game speculates that Akron drains his victims' souls to do this. He can summon lesser enemies to his side, including his signature Rune Claws (floating metal pincers animated by a red orb of energy in their centers) to assist him with healing/support spells and elemental attacks of their own.

After taking some damage, Akron can also switch to his second form, a massive, monstrous face with a gaping mouth. This form mainly attacks by releasing various weapons and creatures from its mouth, including an enormous blade of energy, Evil Worms (demonic, sandworm-like beasts that attack independently of their spiky tails), and a gigantic sphere of dark energy that has a small chance to instantly kill its targets. 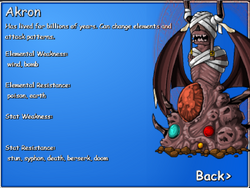 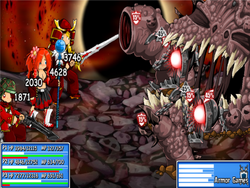 2nd phase (in the middle)
Add a photo to this gallery

Retrieved from "https://villains.fandom.com/wiki/Akron?oldid=528336"
Community content is available under CC-BY-SA unless otherwise noted.