Causing chaos, subjugating all others to his rule.

Aku is the primary antagonist of the popular cartoon series Samurai Jack and is depicted as a demonic creature of near-infinite power and malice whose only real aim in existence seems to be spreading evil, in fact his name means "evil" in Japanese so he is very likely a living embodiment of such a force.

He was voiced by the late Makoto Iwamatsu (Mako).

Originating long ago in the depths of space as a formless evil Aku was banished by the gods Odin, Ra, and Vishnu in order to protect the universe from his influence - yet a small shard of the great shadow managed to survive and flew off into space - for many years this shard continued flying through space until it eventually landed on Earth, causing the extinction of the dinosaurs in the process.

Many years later the site on which Aku landed would become the ancient island of Japan, which Aku infected like a horrible disease - creating vast forests of evil in the land and threatening to consume it, eventually Aku's threat became so great that Jack's father decided to rid the land of the demon once and for all using magical-oil made by Buddhist monks, however when he fired an arrow coated with this oil into the evil entity it didn't destroy it but rather gave it form and sentience, thus forming Aku as a humanoid threat of unstoppable power.

However with aid from Odin, Ra, and Vishnu Jack's father created a magical-sword powerful enough to defeat Aku and fought the demon, at the end of the conflict Aku was transformed into a tree - yet the imprisonment wouldn't last much more than a decade before a solar eclipse freed Aku again.

Aku would then proceed to lay waste to the kingdom Jack's father ruled and engaged in a battle with Jack himself - Jack very nearly killed Aku for good using the magical-sword but Aku threw open a portal in time and transported Jack to a future-world in which Aku ruled supreme.

For the rest of the series Aku is portrayed as the all-powerful ruler of the world and is an almost unstoppable force - yet he fears Jack, knowing very well that the warrior has the power to slay him, Aku has placed a high bounty on Jack's head and is forever trying to dispose of him, whether it be with manipulation, force, or trickery.

Shapeshifting: Called the "Shape Shifting Master of Darkness" at the opening of each episode, Aku can change into virtually any form he desires, from a giant dragon to a small insect, or even a beautiful woman. He can also change his size, liquefy himself, stretch, and expand his body. Aku's consciousness can exist even in a part of himself. He typically changes into animal forms that are threatening to fit certain situations, such as a scorpion or an octopus. He is however limited to his own colour scheme, no matter what form he takes it will always be black, red and green.

Aku needs no food, drink, or air and is capable of interstellar travel. He also has the ability to spy on Jack through a large sphere he can summon at will in his tower.

As Aku is a great and powerful wizard, he possesses a wide knowledge of magic that varies from episode to episode as the series demands. His powers , as shown thus far in the series include:

A significant aspect in the series is that Aku is ageless and immortal. Aku's body is immune to nearly all forms of physical injury. If wounded, the wounds inflicted upon him will regenerate in moments. He can only be harmed and finally defeated by Jack's samurai sword. It is notable that Aku is also vulnerable to various magical and divine attacks (such as the powers and artifacts of gods).

Although Aku can transform into any form, his reflection will show his normal form, most noticeable when Aku turns into a hermit, and asks Jack to look for the god's artifacts. When Jack and Aku are in the swamp, Aku shows his normal form even when he is transformed into his hermit form. He will always have the same reflection, so he splashes the water, and uses the ripples to hide his reflection.

Despite his nearly omnipotent abilities, Aku has a few weaknesses. These include:

Aku is evil incarnate, he embodies the very essence of an evil overlord. Cruel and domineering to all he meet, its obey or be obliterated with Aku. Arrogant and sadistic by default, he has been the ruler of most of the planet for hundreds of years and does not take humiliations easily. Although without any mercy he has enough of an understanding of humanity to successfully manipulate and control people.

Despite this he possess a dry sense of humor and often jokes when in a good mood, frequently mocking Jack whenever he can with whatever he can. In Aku's Fairy Tales it's shown that he seems unwilling to cause harm to children and tried to make himself look like a hero to them rather than Jack. He failed to do so and left the children alone. 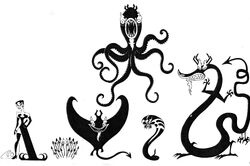 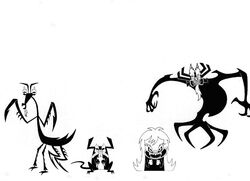 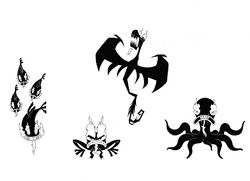 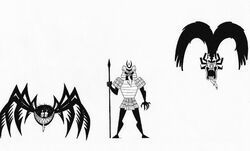 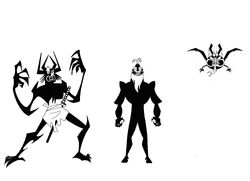 Add a photo to this gallery
Retrieved from "https://villains.fandom.com/wiki/Aku?oldid=622499"
Community content is available under CC-BY-SA unless otherwise noted.