Villains Wiki
Register
Don't have an account?
Sign In
Advertisement
in: Kamen Rider Villains, Demon, Evil from the Past,
and 16 more

Demons
The Akumaizer are the main antagonists of Movie War Ultimatum. They are the last remnants of the Akuma Clan from the Demon World that were seen by humans of several thousand years ago as "devils" and were pushed underground. They receive five Gates from the Phantoms and make the Infinite Monster Plant which revives the Dopants, Yummy, and Zodiarts that were previously defeated by the Kamen Riders to make a Monster Army to invade and conquer humanity.

Each of the Akumaizer wield a rapier-like weapon called the Jankel. They can also perform a group finisher called the Devil Team Attack. 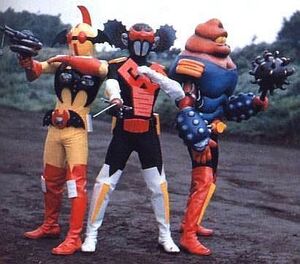