Akuro is the main antagonist of Ōkamiden, which is the sequel of Okami.

Akuro is a spirit of pure darkness. He resembles a giant jaw with a red eye inside. He also has mechanicle hands that resembles Yami in his final form. Akuro who aims to find a vessel of light and become powerful enough to shroud the world in darkness. It was revealed that Akuro was the one behind the manipulations of both Yami and Orochi, using them for his own gain, although in reality Akuro is actually one of Yami's five parts and seeks the other four essences to become the dark lord Yami again. Akuro was destroyed by Chibiteratsu. 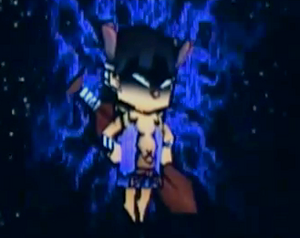 Akuro possessing Kuni
Add a photo to this gallery

Retrieved from "https://villains.fandom.com/wiki/Akuro?oldid=3564641"
Community content is available under CC-BY-SA unless otherwise noted.