Ryuunosuke Akutagawa (In Japanese: 芥川 龍之介, Akutagawa Ryūnosuke) is a member of the Port Mafia of the anime and manga Bungo Stray Dogs. He serves as a recurring antagonist slowly becoming redeemed throughout the series. He is a fictionalized version of the Japanese author with the same name.

He is voiced by Kensho Ono, who also voiced Hakuryuu Ren and Shikorae, in the original Japanese anime, and Brian Beacock in the English Dub.

Ryuunosuke has shown to be extremely violent and ruthless when it comes to his work, all the while maintaining a stoic and detached figure. His composure is frequently broken by rage, however. He is quick to lash out whenever something doesn't go his way.

One of his main drives is his determination to get recognition from Dazai, his former mentor turned enemy. His composed nature seems to break whenever Dazai Osamu is brought up. This drive also comes into play whenever he interacts with Atsushi Nakajima, Dazai's new de facto disciple. His rivalry with Atsushi for Dazai's recognition has caused him to have great hatred towards Atsushi. He wishes to beat Atsushi in combat and will go to great lengths just to duel him.

Ryuunosuke has a Social Darwinist perspective of the world. He believes that the weak deserve to die and yield to the strong. This philosophy heightens his hatred for Atsushi as he considers Atsushi weak, but he is getting recognition as if he were strong.

He also seems to have a general hatred of humanity. This probably stemmed from his history as an orphan. Despite his cold and dark temperament, he has shown to be at least friendly with his sister.

Rashōmon (In Japanese: 羅生門, Rashōmon) is a special ability that manifests as a large shadow-like beast. It is summoned from Akutagawa's coat and can be extended to mid-range. It can consume anything, including space itself. Consumption of space creates an invisible barrier that can block most attacks. He has multiple named transformations for his ability. 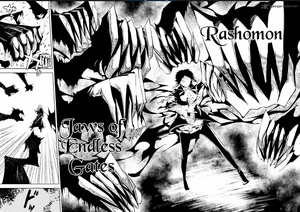 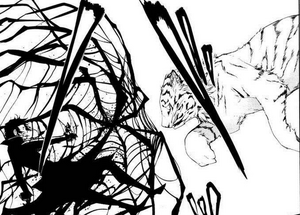