King of the Serververse (formerly)

Leader of the Goon Squad

Complete control over the Serververse

Manipulate Dom into his side (temporarily succeeded).
Force LeBron James to play a basketball game with the Looney Tunes (succeeded).
Trap LeBron's fans and other people in his world for eternity and separate LeBron from his family forever as payback for rejecting him and humiliating him.
Delete the Looney Tunes by making them fail to win a basketball game against the Goon Squad (all failed).

Al-G Rhythm is the main antagonist of the 2021 Warner Bros. hybrid film Space Jam: A New Legacy, the stand-alone sequel to the 1996 classic film Space Jam.

He is a malicious and deceitful computer algorithm who rules the Serververse, a virtual reality in the cyber space which houses different worlds based on Warner Bros. properties. When he kidnaps Dominic "Dom" James, the son of LeBron James, he forces LeBron to play a basketball game with the Looney Tunes against the Goon Squad. He is the boss of Pete as well as the archenemy of both LeBron and Dom James, alongside their friend Bugs Bunny.

He was portrayed by Don Cheadle.

At first glance, Al-G is a hardworking AI who wishes to be recognized for his hard work at the Warner Brothers servers. He also seems to show sadness over how no one ever acknowledges what he does.

Al-G is shown to be quite manipulative and deceiving, as he easily convinces Dom that his father was more interested in basketball than him and used his technology to lure people into the server and create the Goon Squad. Even before the events of the film, he persuades the Tunes (except for Bugs) to leave Tune World and explore the other worlds in the Serververse, much to Bugs' sadness.

He is arrogant and narcissistic as he took a liking to Dom when he praised the ad that he made when not even the executives at Warner Brothers would (because LeBron didn't like it and they did not want to look foolish). This adds to his short temper as he becomes incredibly angry when things do not go his way or if others disagree with him. This brought his somewhat father-son relationship with Dom to an end after the Goon Squad begins to lose to the Tune Squad in the second half of the game and after LeBron apologized to him.

Al-G is also revealed to be a hypocrite. After Dom leaves to play with his father and the tunes after reconciling with him, he takes his place on the Goon Squad and transforms into a giant, muscular basketball player. He then bends the rules of the game and cheats by rewinding the points the Tune Squad scores and breaking past LeBron. When Bugs uses a move that temporarily glitches the game at the cost of his life and Dom throws a jump pad so his father can score the final point, Al-G screams "That's cheating!" even though he cheated first.

Sometime before the events of the film and after the original film, Al-G confronted the Looney Tunes on Tune World. Wanting to separate them in case they get in the way of his future goals, he offers them the chance to explore different worlds in the Serververse. All of the Tunes, except for Bugs, are excited and accept it. They then leave Tune World in a rocket and ignore Bugs as he attempts to convince them to stay. He then watches in sadness as they leave.

In the film, Al-G becomes self-aware of his nature as an artificial intelligence and desires for recognition from the world. He plans to team up with LeBron James and show his technology, Warner 3000, a state-of-the-art product of Warner Bros. Studios that places celebrities in popular Warner Bros. Movies, to the public in order to achieve this goal. During the trip to the studios, LeBron rejects the idea of joining Warner 3000, seeing it as a detriment to his basketball career. Furious, Al-G lures Lebron's son Dom to the server room, where LeBron follows him. Then Al-G kidnaps both of them to the Serververse. Holding Dom captive, Al-G mask a deal with Lebron of playing a basketball game, and if he loses the game he will be forced to stay in there forever. Al-G has his assistant Pete to send LeBron to the Tune World.

LeBron then meets Bugs Bunny, the only remaining resident of the world. Bugs revealed that Al-G took all of his friends away to the other worlds. LeBron then started his journey of finding Bugs' friends, such as Daffy Duck, Yosemite Sam, Wile E. Coyote etc. which also involved with stealing Marvin the Martian's spaceship to travel around the Serververse.

Meanwhile, Rhythm manipulates Dom into turning against his own father by creating the Goon Squad and upgrading himself as an unstoppable basketball player.

LeBron and Bugs successfully find their friends and assemble the Tune Squad. Despite Bugs' objections, LeBron insists on teaching them the fundamentals of basketball. The Tune Squad then meet Al-G and the Goon Squad, led by Dom, to further the stakes, Al-G livestreams the game and abducted the countless viewers into the virtual world, which included LeBron's family, and if they lose the game, the viewers will get to stay in here forever with the Tunes being deleted permanently. As Dom appears, LeBron tries to warn him that AL-G is lying to him, but Dom refuses to believe him, thinking AL-G Rhythm is his friend, as AL-G manipulates him again how LeBron still doesn't appreciate him as a basketball player now.

As the Goon Squad dominate the first half of the game, LeBron and his friends start planning a way to beat them. At one point, Sylvester suggested to recruit the former member Michael Jordan (the protagonist of the first film); however, it turns out he got Michael B. Jordan instead of the player. Realizing his mistake, LeBron allows Bugs to devise the strategy of using cartoon physics in the second half of the game. As the Looney Tunes gained the upper hand, LeBron eventually apologizes to Dom for interfering with his dreams, and Dom forgives his father by joining the Tune Squad and after finding out his dad was right about AL-G Rhythm when he berated Dom for failing to get more points, selfishly saying that being himself was a mistake and finally seeing now that AL-G was never his friend and that he only cares about himself.

Angry and disappointed by Dom's abandonment, Al-G takes control of the game and turns himself into a 10 ft. basketball player ready to defeat the Toon Squad in the final seconds. During the third half Lola scores a point but AL-G cheats by taking two points away. Not letting the Tunes win at all by any means necessary. Dom then realizes the only way to win the game and defeating Al-G is to use the move that LeBron had done in his video game which caused it to glitch out. With the cost of being erased, LeBron proposed to do it, but instead Bugs sacrificed himself to do the move and weakened the Goon Squad.

In the last stand and with seconds left, Al-G loses control of the game and desperately tries to grab LeBron and prevent him from dunking the ball, but Dom tosses an extra jump boost to his father allowing him to literally "posterize" Al-G before being shredded by Pete, deleting him and the Goon Squad once and for all. 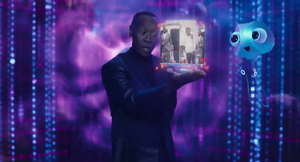 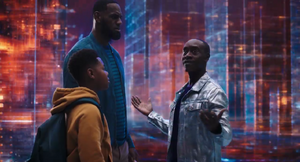 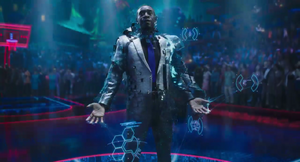 AI-G Rhythm rising to power by becoming a basketball player 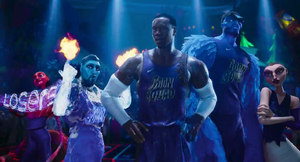 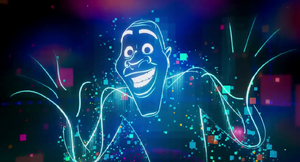 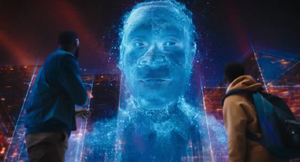 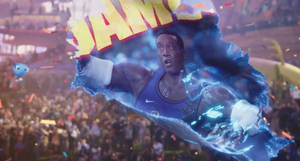