Boss of the Chicago Outfit

Rule Chicago with his Prohibition business for life (failed; tried for tax evasion).

Alphonse "Al" Gabriel Capone is the main antagonist of the 1987 epic gangster thriller drama film The Untouchables, which he is based on the real life gangland boss of the same name. Unlike his real-life counterpart, he is never shown committing any good deeds as the film goes out of its way to make him look as deplorable as possible.

He was portrayed by Robert De Niro, who also played Vito Corleone in The Godfather Part II, Travis Bickle in Taxi Driver, Jake LaMotta in Raging Bull, David "Noodles" Aaronson in Once Upon a Time in America, Jimmy Conway in Goodfellas, Frankenstein's Monster in Mary Shelley's Frankenstein, Max Cady in Cape Fear, Neil McCauley in Heat, Dwight Hansen in This Boy's Life, Sam "Ace" Rothstein in Casino, Gil Renard in The Fan, Louis Gara in Jackie Brown, Don Lino in Shark Tale, Senator John McLaughlin in Machete, David Callaway in Hide and Seek and the Fearless Leader in The Adventures of Rocky & Bullwinkle and Louis Cyphre in Angel Heart.

Al Capone was born on January 17, 1899 in New York City. He moved to Chicago, Illinois before he was 19 years old, and joined an American Mafia gang called the Chicago Outfit, led by Johnny Torrio. Torrio would be a great mentor to Capone, and after an attempt on his life, handed all his operations to Capone in 1925. By then, he knew how to handle the Outfit's business during Prohibition and ruled Chicago's criminal underworld leading up to the St. Valentine's Day massacre. Shortly after, this gained the attention of Eliot Ness, who vowed to bring down Al Capone and end his operations once and for all.

31 years ago in 1930, during Prohibition, Capone rules the illegal liquor traffic in Chicago with merciless ferocity, by bumping off anyone who tries to oppose him and corrupt police officers. Bureau of Prohibition agent Eliot Ness, after trying to frame him in a raid (failed due to the tips that Capone receives by the police officers he pays) decides to form a new team of incorruptible officers: Irish-American veteran officer Jim Malone, Italian-American recruit George Stone and accountant Oscar Wallace, later known as The Untouchables.

During a Mafia meeting, Capone shows all his ferocity by smashing the head of one of his men with a baseball bat. After several successes against Capone, which also brings to the seizure of a coded book that would incriminate him, Capone orders his right hand Frank Nitti to kill Wallace and then Malone. Ness eventually succeeds in taking Capone to court for tax evasion after getting his chief bookkeeper, Walter Payne, to testify against him; Walter was due to leave the city with Capone's subordinate The Bowtie Man and his goons, but Ness and his ally George Stone manage to extract Walter after killing The Bowtie Man and all the other gunmen in a shootout.

Later on, Ness kills Nitti when the latter tries to escape for Malone's murder along with a letter that reveals Capone bribed the jury. Afterwards, Capone is eventually convicted and sentenced to 11 years in prison.

Al Capone getting his face shaved.

Al Capone wanting to fight Eliot Ness after an encounter but his men hold him back.

Al Capone after he is found guilty for his crimes. 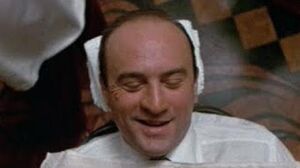 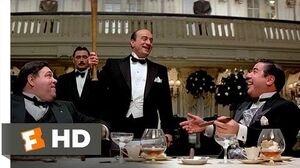 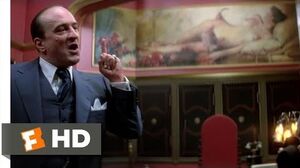 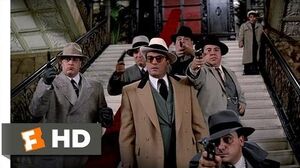 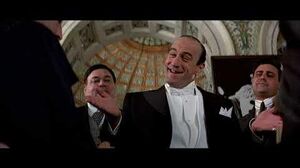 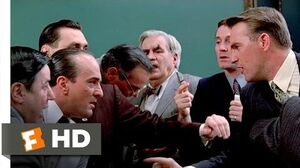