Become rich by selling the Roundup Gang to the Tokyo museum in Japan (failed).

Albert "Al" McWhiggin, also known as the Chicken Man, is one of the two main antagonists (alongside Stinky Pete) of Pixar's third full-length animated feature film Toy Story 2 and the unseen overarching antagonist of the 2013 Halloween television special Toy Story of Terror!.

He is the greedy owner of Al's Toy Barn and an avid toy collector who steals Woody in hopes of selling him and the Woody's Roundup gang to Tokyo for money. However, Woody's friends Buzz Lightyear, Mr. Potato Head, Slinky Dog, Rex and Hamm saw Al steal their friend and went out to rescue Woody and bring him home.

He was voiced by Wayne Knight, who also played Newman in Seinfeld, Emperor Zurg in Buzz Lightyear of Star Command, Krudsky in Scooby-Doo and the Goblin King and Dennis Nedry in Jurassic Park.

Al is an obnoxious, greedy and high-strung man who has little or none patience for anyone or anything that gets in his way. He is also a shrewd businessman, being the owner of the successful Al's Toy Barn toy store as well as a seller of rare and vintage toys on the side.

However, when things do not go his way, Al resorts to dirty tricks to get what he wants - after failing to convince Andy's mom to sell Woody to him, he creates a distraction at the garage sale by kicking a skateboard, drawing her attention away long enough for Al to pick the lock of her moneybox and steals Woody.

He is also shown to be rather lazy; such as when he complains about "driving all the way to work on a Saturday", even though his apartment is only across the street from the store. He also sleeps on his couch at night rather than in his bed.

Despite his negative traits, he is genuinely grateful to the toy repairman for fixing Woody when his arm is ripped off.

According to a Disney Adventures magazine, Al could not play with his toys when he was young, which soon led to his toy-collecting nature, unlike Sid (who breaks toys and uses them for scary experiments) Al prefers to keep any toys and related merchandise he owns as pristine as possible, keeping them clean and packed away safely, as well as repairing any damage done. This is more to increase their selling power instead of any sense of personal joy gained from toys.

Al McWhiggin is a balding, overweight, middle-aged man who wears glasses, a bowling shirt, black slacks and leather shoes and a red wristwatch and he also sports a goatee. His brown hair is done in a combover, and his sideburns have patches of gray hair. While filming commercials for Al's Toy Barn, he wears a large white chicken suit with his face visible through the yellow beak.

Before the events of the film series, Al opened his toy store called Al's Toy Barn and made a profit in selling toys (including the famed Buzz Lightyear action figures) from there, proving to be quite a successful business venture. He also turns out to be very obsessed with a TV show called Woody's Roundup from the 1950s. As such, he made a deal with the Konishi Toy Museum in Tokyo to sell them the doll versions of the series' main characters. After searching through yard sales, Al was able to find and buy three of the characters: Jessie the Cowgirl, Bullseye the Horse and Stinky Pete the Prospector. The only toy missing was Sheriff Woody.

Al and his store were mentioned in the first Toy Story film in a Buzz Lightyear action figure commercial, in which Buzz was watching at Sid Phillips' house, making him realize that Woody was right all along, he is just a toy rather than an actual space ranger. It also can be possible that Buzz was bought from Al's store by Andy's mom as a birthday present earlier in the film.

Al makes his sole appearance in the second film, as he is first seen as the Chicken Man in an Al's Toy Barn commercial on the TV in Andy Davis' bedroom. Woody tells Rex to turn the TV off so that Andy and his family won't hear.

Rex has trouble in turning the TV off (due to his tiny arms and big feet), but Hamm manages to turn the TV off himself, states that he hates the Chicken Man so much. Al is later seen attending the Davis' yard sale when he spots Woody on a table saying, "There's a snake in my boot!".

Gasping at this, Al immediately runs up to Woody, picks him up, and examines him (as well as noticing a rip in his arm, which he would have it fixed). He then sees Woody's hat, puts it on him, and becomes overjoyed that he finally found him. Al initially offers to pay 50 cent to buy Woody, but Andy's mother (unaware of how Woody came to the yard sale) declines by taking Woody away, he tries to offer $50, but Andy's mother saying that he's not for sale as he still belongs to Andy. Al offers her to trade his watch in exchange for Woody, which to no avail.

Refusing to take no for an answer, Al slides a skateboard backward into something, destroying it and distracting Andy's mother in the process. With her back turned, Al quickly steals Woody by putting him in his bag without letting her find out. He then leaves the yard sale and drives away in his car to his apartment, but Buzz Lightyear, Bo Peep, Hamm, Lenny, Mr. Potato Head, Slinky Dog and Rex watch Al steal their friend and Buzz chases him and jumps into the trunk, trying to open it up in order to free Woody.

However, Buzz fails when he falls off but only manages to catch a feather. Buzz watches as Al keeps driving to his apartment. Once he arrives at his apartment, Al takes Woody up to his room. After Al leaves, Buzz learns about Al's identity as the Chicken Man and him, Hamm, Mr. Potato Head, Slinky and Rex head to Al's Toy Barn to save Woody.

Later, Al is in his chicken costume getting into an argument with someone on the other line for his next commercial. After hanging up in frustration, Al turns his attention to Woody, chuckling and telling his "little cowboy friend" that he is going to make him big "buck buck bucks". He proceeds to laugh greedily, leaves the apartment, and then drives to Al's Toy Barn to do his commercial.

After the commercial is over, Al walks into the apartment with a camera, as he attempts to take photos of the cast of Woody's Roundup. He then finds out Woody's right arm has been ripped off (similar to Buzz losing his left arm from the first film), which upsets and shocks him. Panicking, Al picks up the phone, asking a cleaner to fix Woody the next day while he says that it will be the first thing to do in the morning. That night, Al is seen sleeping on the couch, with Woody's torn arm on his pocket.

Wanting to reclaim his arm and get back to Andy's, Woody climbs up to the couches while Bullseye helps him get up. Bullseye starts licking Al's fingers until Woody commands him to stop. Woody then grabs his arm, but as he is about to leave, the TV turns on, causing Al to wake up, knocking Woody over and then putting him back to where he was. Al finds the remote and turns off the TV before going to bed. Stinky Pete then convinces Woody to wait until morning after Woody confronts Jessie for turning on the TV (even though Jessie didn't do anything wrong) and proceeds to fight her (similar to how Woody and Buzz fought at the gas station from the first film).

The next day, the cleaner arrives at Al's apartment and fixes Woody's arm (similar to Buzz having his arm reattached by the Mutant Toys from the first film), much to Al's delight, describing Woody to be "just like new". Al then takes pictures of the Woody's Roundup cast and happily heads down to his store office to fax the pictures to the museum, just as Buzz, Hamm, Mr. Potato Head, Slinky, and Rex arrive the store to find Woody. As the toys, along with another Buzz Lightyear action figure search through Al's office, they are forced to take cover when Al arrives to fax the pictures to the museum, where they hear about his plan to sell the Roundup gang to the museum.

They manage to follow Al back to his apartment to find Woody, but Stinky Pete has blocked Woody's chance to leave by sealing the vent door shut, revealing that he framed Jessie for turning on the TV last night and also reveals that he was never sold for years and wants to go the museum to be appreciated. This allows Al to collect the Roundup toys in a case as he leaves for the airport. However, Buzz and the gang manage to catch up and rescue Woody, Jessie, and Bullseye while Stinky Pete is stuffed into a little girl's backpack to teach him a lesson about "playtime", much to Stinky Pete's dismay.

As Andy's toys head back home, Al finds out that the toys are gone, much to his shock. As a result, Mr. Konishi calls the deal off and Al's store begins to suffer financial troubles. The next day, Al is last seen in another Al's Toy Barn commercial sobbing over his loss, saying that his store has gotten the "lowest prices in town, everything for a buck-buck-buck". This seems to delight Hamm and Rex as they watch the commercial, with Hamm happily saying that "crime doesn't pay".

Years later, after Andy has grown up and given Woody, Buzz, Jessie, Bullseye, Rex, Hamm, Slinky and Mr. Potato Head to a young girl named Bonnie Anderson in Toy Story 3, Al is still determined to sell the roundup gang to Japan. And in the 2013 television special Toy Story of Terror!, although Al doesn't physically appear, he is the winning bidder of Ron Tompkins's auction for a Sheriff Woody doll and that his pet iguana Mr. Jones had taken from one of his patrons (ironically the same Woody doll Al had stolen all those years ago). This is revealed on the shipping on Woody's box. Though Ron packages Woody in a box to sell him to Al, Jessie escapes and rescues Woody in time.

Al was originally going to appear in the special but was cut from the final version. He is included in a deleted scene on the Toy Story of Terror! Blu-ray. 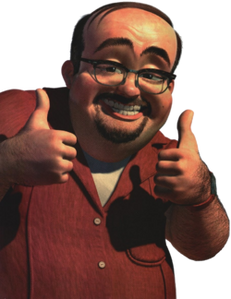 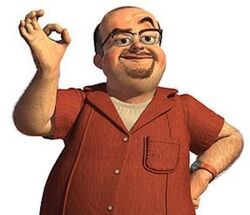 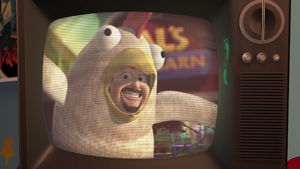 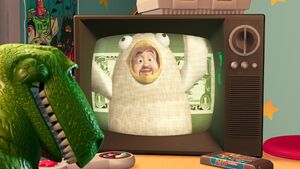 Al in his commercial as Rex tries to turn off the TV. 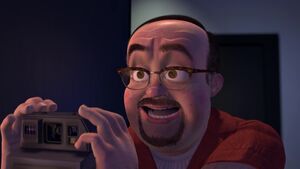 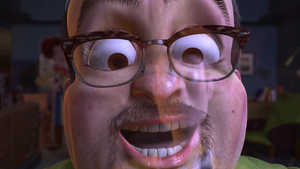 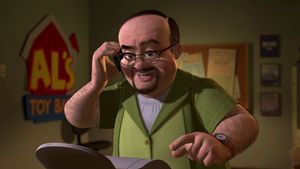 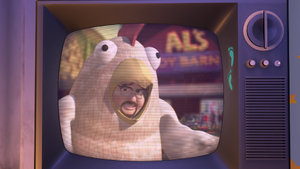 "Welcome to Al's Toy Barn. We've got the lowest prices in town. Everything for a buck-buck-buck." 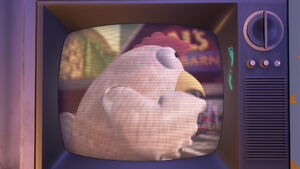 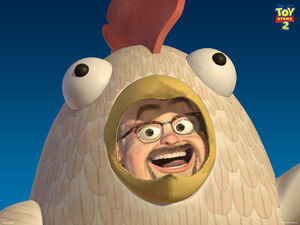 Al in his Chicken Man costume. 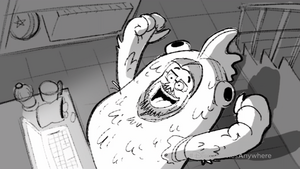 Al in deleted storyboard material of Toy Story of Terror!. 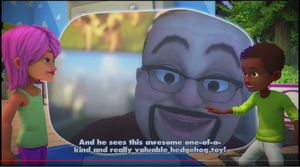