The Godfather by Mario Puzo

Albert "Al" Neri is a secondary character from the The Godfather novel by Mario Puzo and the film trilogy by Francis Ford Coppola. He was the personal enforcer, bodyguard, and assassin of Michael Corleone.

In the films, he was portrayed by the late Richard Bright, who also portrayed Sheldon Kerrick in Law & Order: Special Victims Unit.

Neri started out as a member of the New York City Police Department. While an NYPD officer the quick tempered Neri often cracked his flashlight over the heads of Italian youths and smashed the windshields of diplomats who had ignored traffic laws. In fear of his temper his wife Rita left him. Not long after Neri was convicted of voluntary manslaughter for killing the drug dealer and pimp Wax Baines after he attacked a woman and left her with permanent scars.

Seeing potential in the young man, Corleone family consigliere Tom Hagen and caporegime Peter Clemenza engineered Neri's release from prison. Even though anyone who ever served as a police officer is forbidden from becoming a made man, Neri impresses Michael enough that this is waived in his case. Michael recruits him into Clemenza's regime, and Neri soon made his bones by executing rival mob boss Emilio Barzini. In the novel Neri had also murdered Moe Greene; in the film this is carried out by a second, anonymous gunman. After Salvatore Tessio is killed for betraying the Corleone family, Neri is promoted to caporegime.

By the 1950s Neri served as the head of security for all of Michael's operations in Las Vegas. While on Lake Tahoe Neri killed Michael's brother Fredo by shooting him in the back of the head and dumping the body overboard. Aside from Michael, his wife Kay and his son Anthony, no one knew that Neri had killed Fredo; they were all led to believe that Fredo had drowned in the lake.

Approximately 20 years after the events of the second movie Michael had moved back to New York and was making efforts to turn the Corleone Family legitimate. Corleone had sold off his rackets to his former enforcer Joey Zasa. Neri still served as Michael's bodyguard, and was the only holdover from Michael's criminal enterprises. Neri saved Michael's life from a Zasa assassination attempt and then helped Michael's nephew Vincent Mancini murder Zasa during a festival while Michael was incapacitated from a diabetic stroke. Despite having approval from Connie Michael was not happy, and ordered Neri and Vincent to never do something like that again as long as he lived.

After Michael recovered he retired as Don and handed his duties over to Vincent, telling him to call himself Vincent Corleone going forward. Neri was the second man to give his loyalty to Vincent, after Don Tommasino's former bodyguard Calò. Vincent soon had Neri infiltrate the Vatican. Neri then killed the corrupt Archbishop Gilday and tossed his body over a staircase. 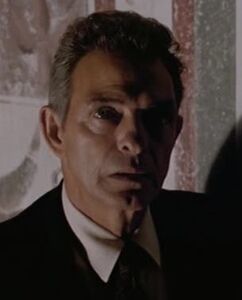