Member of the Corpus Board of Directors (formerly)

Insulting the Grineer
Experimenting on the Infestation (formerly)

Trick the Grineer into an outrageous contract (briefly succeeded).
Hide the locations of Grineer Settlements from the Tenno (failed).
Defeat General Sargas Ruk in the Gravidus Dilemma (failed).
Complete the Zanuka Project (succeeded).
Survive the Corpus Board and the Tenno's attempt on his life (succeeded).
Conquer and unify the Origin System into a "Mutalist Empire" (as an Infested, failed).
Cure himself of the Infestation (succeeded).
Gain a favor from the Tenno by helping them save themselves from Hunhow (succeeded).
Escape the Acolytes (succeeded).
Rebuild his influence within the Corpus (ongoing).
Trick an old man into giving him Sentient technology (failed).
Escape from his "partnership" with the Sentients (ongoing).
Capture the Wolf and turn him and his pack into Sentient amalgams (succeeded).
Enslave the Wolf and make him his attack dog (failed).

Alad V is a major antagonist and occasional ally in the MMO third person shooter Warframe.

He is a Corpus entrepreneur and supervisor of the Gas Cities floating in Jupiter's atmosphere. He used to be a member of the Corpus Board of Directors and the head of Grineer Relations, until his Zanuka Project sparked a war with the Grineer that ended in utter disaster and a massive waste of resources for the Corpus.

With the rest of the Board turning against him, Alad V was forced to use the Infested he had been experimenting on as weapons against them. This resulted in him being exposed to and falling under its influence, becoming obsessed with unifying the Origin System in a "Mutalist Empire". Though he eventually managed to free himself of it and rejoin the Corpus via a mutually beneficial deal with the Tenno.

During an attempt to rebuild his capital and influence within the Corpus, Alad was tricked into forging an alliance with the Sentients. He is now trying to find a way out of this alliance without losing his head.

He serves as the primary antagonist of the "Patient Zero" quest, as well as the "Arid Fear", "Hunt for Alad V", "Suspicious Shipments", "Breeding Grounds", "Mutalist Incursions" and "Hostile Mergers" events and the overarching antagonist of the first Nightwave series. Despite the numerous problems he caused, he also appears as a supporting character in the "Second Dream" quest and the "Sling-Stone", "Tubemen of Regor" and "Shadow Debt" events. Depending on player choice, he either had an antagonistic or supporting role in the "Gravidus Dilemma" event.

He is voiced by Kol Cosbie, who also voices Captain Vor and General Sargas Ruk.

Alad V wears a blue, metallic suit similar to that of Nef Anyo, but significantly more practical and resembling a labcoat, fitting for his constant need to experiment on everything he gets his hands on. He also wears a helmet-like contraption on the back of his head that lowers a visor onto his eyes and connects to a small piece of machinery on his neck. This machinery is contains a magnet of sorts that keeps a circular disk on his shoulders that he uses to control his robotics. The front of this disk slides open so he can take it on and off whenever he pleases.

Like the other Corpus, Alad V has black tattoos on his face, his being two thin running down from underneath his eyes all the way to the bottom of his face.

While Alad V himself didn't appear in the event, the Lotus intercepted one of his transmissions to the Corpus Board, telling them that the Grineer have discovered that they had been stockpiling their products. The Grineer Queens demanded that they either lower their prices, angered that the Corpus had tightened their contracts despite ample supply, or witness their stockpiles be destroyed by their new Fomorian-class battleships. Alad mocked the Grineer in his report and claimed the threat a simple bluff, suggesting that the Board raise the prices instead and laugh in the Grineer's faces when the non-existant ships don't arrive.

Luckily for Alad V, the Lotus decided that a victory for the Grineer would've given them far too great of an advantage and resulted in a system-wide resource shortage, so she sent the Tenno to sabotage the Fomorian ships from within. With their trump card destroyed the Grineer were forced back to the bargaining table. Alad V sent another message to the Board, informing them that "Sling-Stone was a success". The Tenno had done their work for them and all he had to do was dangle a small reward in front of their noses. However, he wisely decided to be cautious regarding the destruction of the Fomorian fleet and dispatched some scouts in case the Grineer held some Fomorians in reserve.

The Hunt for Alad V

Alad and the Tenno 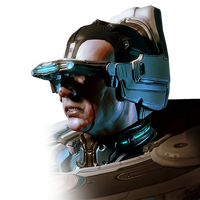 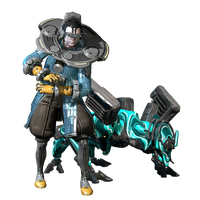 Alad V with his personal bodyguard, the Zanuka proxy.

Promotional image for the Sling-Stone event.

Promotional image for the Hunt for Alad V event.

Promotional image for the Tubemen of Regor event.

Promotional image for the Hostile Mergers event.
Add a photo to this gallery

Retrieved from "https://villains.fandom.com/wiki/Alad_V?oldid=3974179"
Community content is available under CC-BY-SA unless otherwise noted.