Working on the Demia Project.

Purify the human world and reshape it to mirror the world of Gamma.

Alain is the youngest son of Gamma Emperor Adonis and one of the major antagonists in Kamen Rider Ghost, until an uprising caused by his elder brother Adel led to him being banished and defecting to the heroes.

He was portrayed by Hayato Isomura.

Alain was born at some point around the year 1866. His family eventually entered the World of Gamma but his mother died of an illness soon after, followed by his older brother Argos.

Alain later began preparations for the Gamma's invasion of the human realm, allying with Chikara Saionji, a man with knowledge of the Gamma. Alain was also introduced to Kanon and Makoto Fukami by his sister Alia around this time, and he would later come to consider Makoto his best friend.

However, Alain soon encountered an obstacle in his agenda in the form of Takeru Tenkuji aka Kamen Rider Ghost. After Ghost's interference in his plans persisted, his father sent Jabel to assist him.

Alain later took the Mega Ulorder, allowing him to become Kamen Rider Necrom. With his new power, he was able to defeat Ghost and Specter with ease. Makoto tried to reason with him but to no avail. Alain later fought Specter again and inserted the Necrom Eyecon into Specter's driver, turning Makoto into his puppet. However, Makoto was later freed by the combined powers of Takeru, Kanon and Specter's Eyecons.

Alain was later framed by his older brother Adel for the death of their father after Adel killed him to usurp the position of Emperor of the Gamma. After Adel destroyed his Eyecon form, Alain was forced to go back to his mortal body. He then went on the run as Adel sent his Gamma Commandos and Gamma Superiors to hunt him.

Alain was later discovered by Makoto and Takeru in the human world. Also, he was soon found by Jabel, who had been sent by Adel to kill him. Alain turned into Necrom and did his best to fight off Jabel, but his weaker body proved unable in keeping up with Jabel's Ultima form. Fortunately, he was saved by Specter's Houdini Damashii, which allowed him to escape.

Alain later agreed to ally with Takeru and opted to stay in the human world to learn more about it.

By the time he and Takeru began to return to Gamma to rescue his father Adonis and Makoto, certain outcomes finally cause Alain snapped to reality of Demia Project, such as witnessing limited side-effect of Gamma Eyecon Capsule which Takeru witnessed before him, and the death of his father in front of him and Takeru's eyes.

When finding out his eldest brother Argos, who died is ometime after their mother's death, is revived as a fallen Kamen Rider Dark Ghost, Alain at first happily reunite with his brother. However, he reject his fallen brother's plan, which is even worst as Demia Project.

When Demia Project is at 90% complete, Alain, Makoto and their allies finally found out that Adel was involved on murdering Takeru's father Ryu out of jealous during their childhood life, eventually cause the latter's rescue mission Makoto and Kanon being prevented, and Adel's jealousy was because he belived his father did not loved his family ever since the death of Alain's mother at most part before Argos was.

By the time Adel finally found out his father was indeed loved his family and was traumatized by his wife and Argos' deaths, yet was too late to realize Gammaizers' true colors, which led him request Takeru to do a mercy kill, Alain succeeded his now late brother in his honor and atonement sometimes after Gammaizers are finally be destroyed. Eventually, he married to Makoto's sister Kanon in the future. 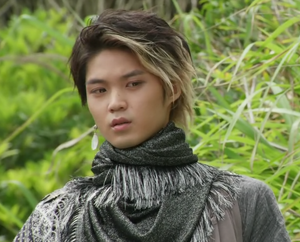 Alain as he initially appears.