Alan is the main character of the YouTube web series Alantutorial. He is the creator of the YouTube channel Alantutorial, as well as all the videos posted on said channel. Though he appears to be merely misguided rather than genuinely evil, his careless behavior has gotten him into trouble on numerous occasions, culminating in his apparent abduction, enslavement and neglect by an unseen captor or group of captors that he eventually escaped from.

He was portrayed by Alan Resnick, an American actor.

Alan is a young man with a passion for giving tutorials. The videos he creates are intended to teach the viewer how to do various things, and they are often completely wrong and/or useless.

Alan is soft-spoken and usually seems very anxious or unsure of himself. He frequently asks viewers to like, favorite his videos and subscribe to his channel several times in the same video. He displays a strange affinity for slats of wood and is apparently quite attached to a certain blue chair, as he becomes very distressed when it falls over. His mental soundness is questionable; he seems to be under the impression that he's still a child, and often misidentifies familiar objects and procedures. He also seems to have difficulty recognizing the difference between various substances, as he continuously mistakes other liquids for water, and when he does encounter water after being abandoned by whoever had previously been looking after him, he immediately called the liquid "juice" instead.

Alan's face has yet to be seen in any of his videos. Not much is known about Alan's life outside of his obsession with tutorials. He lived in a small one-room apartment with his brother (as evidenced in the video where he uses a hard drive that belongs to his brother, as he put it), and his brother locked Alan out of it once he started physically destroying his own room.

In one video, someone is heard loudly knocking on the door; the identity of this person could possibly have been his brother, but it's thought that Alan himself is knocking on the underside of the table and responding to himself, to give the impression that someone else is there.

Alan strongly desires money, and becomes somewhat addicted to receiving it once his captors begin presenting him with money for reading the news or making tutorial videos.

Alan is apparently quite reclusive and seems to avoid human contact; prior to being locked out of his apartment, he rarely left his room, and he was once seen hastily running away when confronted with another person. He was eventually taken to some form of facility, and the unknown people holding him there forced him to do tutorials against his will to earn money for them.

In the video "tutoiral" The room in which Alan was kept eventually became incredibly dirty and dark (how it came to be this state is unknown) and he escaped the facility by knocking a hole in the wall and crawling through it. After that, Alan has never posted a video ever again, and nothing is known what happened to him after he got out.

During many of his tutorial videos, Alan is seen doing many bad and/or illegal things in his videos. Included are: 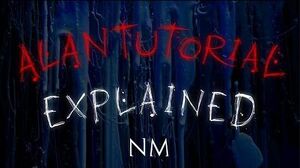