Kill Morse and his friends (failed).

Jago was originally presented as DCI Ronnie Box's minion after he took over the city police. At first, he was presented as just a corrupt and smug police officer who assisted Morse at times, but more often served as a troublemaker just like Box and looked down on Morse and Strange.

However, Jago is actually much more malicious and is not just the true mastermind behind Clive Burkitt and George McGryffin's actions as their crime partner. He was responsible for not only the tragic death of DC George Fancy, but also responsible for the series of drug abuse and drug war across Oxford, and even the corruption within Thames Valley.

He was portrayed by Richard Riddell.

It was revealed that, during the mass shootout between the gangs of Eddie Nero and Cromwell Ames, Jago was amongst the police beside Fancy. Seizing the debacle as his chance, Jago shot Fancy dead with Box's gun and stole the heroin supply of Nero, before taking over Nero's remnants as well as his drug dealing business. Later, Jago replaced heroin with quinine that is much more lethal. His main motives are that he could exploit the city's drug crisis and gang war for his own profits.

Throughout the entire Series 6, besides the murders that Morse investigated, there were also several incidences of death that were caused by drug abuse. There were at least fourteen casualties who died of a drug overdose, with Jago behind all of them. In the third episode of Series 6, there was a seemly traffic accident that led Bright to discover it was a car to transfer drugs, and the car was hijacked by the drug dealer, with the original driver being killed.

Above all, DeBryn discovered that the bullet that killed the original driver was the same type that killed George Fancy, a result that made Morse realized that the murderer of Fancy was still at large and finally decided to join Strange's cause to find the killer. It was revealed that Jago had killed the original driver and allow his minion to take the car for carrying drug supplies.

Later, Morse discovered that Dr. DeBryn was kidnapped by McGryffin's henchmen and went to rescue him alongside Bright, Strange, and Thursday, only to find Jago being the man behind McGryffin's actions. After he finally revealed his true nature in front of the Cowley boys, Jago took Dr. DeBryn hostage and admitted that it was he who killed George Fancy, not Box. He also tried to murder all five of them and framed them for corruption, but Bright managed to gather police force from the traffic division, to which Jago himself cannot reach. Jago immediately retreated into the factory alongside his minions.

Later, Jago confronted Thursday in the factory and was ready to kill him, before he was confronted by Morse. Jago mocked Morse for trying to shoot someone from behind, but Morse replied that was exactly how Jago killed Fancy. Hearing this, Jago merely said Fancy was in the wrong place, revealing that Jago was dealing with Nero for drug money at the time.

Before Jago had a chance to finish Thursday and Morse, Box (who had a change of heart) arrived. Jago was delighted at first, sarcastically complementing Box for stop acting like a coward, before he goaded Box to kill both Morse and Thursday. However, much to Jago's dismay, Box refused and shot Jago dead instead, but he was also shot by Jago in the process. Eventually, the deaths of Fancy and many others were avenged. 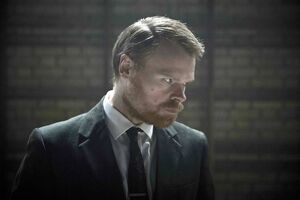 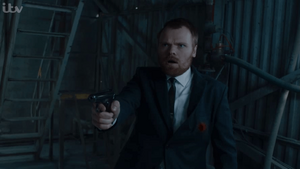