Kill as many women as possible with Betti's mother for sexual activity.

Kill everyone close to Betti.
Kill Betti's mother to stop her demands for murder (all succeeded).
Brainwash Betti by terrorizing her into being exposed to murder.
Kill Betti and escape justice (both failed).

Alan Santini is the main antagonist in Opera/Terror at the Opera. Santini is a police inspector and secretly a serial killer and accomplice/lover of the dead mother of the main character, Betti. Seeing Betty in an opera production of Macbeth brought about flashbacks to crimes with her mother, resulting in more murders throughout the movie so Santini could get Betti to himself.

Santini was a young lover of an unidentified mother of a girl named Betti. The mother was both an opera singer and severely abusive to her daughter. Known only to the two of them, Santini and the mother would partake in "games" during their sexual trysts, which would comprise of the mother being tied up and watching Santini stab and strangle women to death, all for arousing the couple. At least three women were murdered by the duo in this erotic fashion. Betti herself was once a witness to one murder, but she suppressed the memory for years without knowing. Betti was soon orphaned when her mother's demands of Santini increased beyond his own capacity, resulting in him strangling her to death. Betti would soon grow up to be an opera singer herself, stationed as an understudy for an avant-garde of Macbeth. Seeing her in that positioned while stalking her throughout her life, Santini was aroused enough he finally snapped, yearning for the "games" again, but wanting to dominate Betti and use her as a surrogate for her mother.

When Betti was cast into the role after the intended lead, Mara Cicova, was run over by a car and disabled when running out of the opera house in a hissy fit, Santini's the first to let her know, in a grumbly voice on a stalker call while watching her from an air vent. Despite jitters and stress of dazzling perfection and fitting Betti in so soon as an understudy, the opera goes as planned, with Betti wowing the crowd. Santini occupies an empty observation box, watching with his binoculars after sneaking him. A stagehand finds him and tries to force Santini out, but Santini grabs him and slams his head repeatedly into the coat hanger, violent enough one of the stage lights attached to the box snaps off and nearly crashes down on the audience members below. Betti's shocked herself and cuts off too soon, but Marco encourages her to keep going to finish the performance.

Santini, after the show, is brought on to investigate, introducing himself when questioning Betti and saying he saw her performance and that she was amazing on stage. Santini stalks her all the way to heading with Stefano, her boyfriend, to his apartment, where they have sex. As they dress themselves and Stefano leaves, Betti's captured by Santini and tied to a column and gagged. Rows of needles are then taped under her eyes, threatening her with "If you try to close your eyes, you'll tear them apart." to make her watch. Stefano finds her and rushes toward her, but Santini, in a full mask and disguise, stabs up into Stefano's chin and mouth to stun him first, then repeatedly while he's on the floor, to Betti's horror while she screams and struggles to get out. Santini then gropes her while grumbling "bitch in heat" before tying her and taking off the gag and nails before running off.

A stunned Betti, now realizing she many now know the killer, doesn't report that detail to the police, but she does confide in Marco, the opera's director and her close friend. The next day, Santini breaks into the prop room to caress and mutilate Betti's costume dress, where the ravens attack him to chase him away. he reacts by slashing at them, successfully killing three ravens, which makes then harbor a bloodthirsty grudge against him, causing him to flee. He arrives later again, "appalled" by the crimes and concerned that there's more danger and demands more information. When the crew says they don't know more and the raven trainer's mourning his dead birds, Santini takes his leave. He looks for Betti, but she sneaks away to her dressing room to not be seen. Because of her shredded costume, wardrobe designer Giulia goes over the costume with her for reparations. They find a golden bracelet they don't recognize, and when Giulia tells Betti to got a magnifying glass, Betti's again restrained and threatened by the killer. Giulia comes out having treated the bracelet with a solution and restored the inscription, knowing what it says, but she's horrified seeing Betti again rendered helpless and terrified. Betti once again is scarred by seeing Giulia be attacked, but she fights back and even rips off the killer's mask. Trying to say the killer's identity, she's strangled and pulled to the floor, then stabbed to death with tailor shears, with her flailing and half-open mouth cause the bracelet to fall into her throat. Betti's further traumatized seeing the killer open Giulia's jaw with the scissors, and when the bracelet can't be retrieved from her mouth, her throat is cut open with the scissors, pulling the bloody bracelet out. The killer again releases Betti completely and runs off, bracelet in hand.

Betti runs back to her apartment, seeing Santini there to check up on her and ask her more questions. She tells of the attack, and he reassures her of her safety, promising to arrange security. An Inspector Soavi arrives as her security, then leaves to take a phone call, while Mira comes and reveals she just talked to an inspector claiming to be security. Terrified from one of them being an imposter, one arrives at the door and demands to come in. Mira goes and looks through the peephole, armed with a kitchen knife. She's unconvinced even when the questionable man on the other side shows Soavi's credentials and a revolver through the lens. When Mira tells him to go away, he reveals himself as the killer without outright saying so by shooting through the peephole, blasting the bullet through Mira's eye and head, killing her almost instantly. Betti finds out the phone lines are cut, and the killer breaks into the apartment. When Betti tries to get out the front door, sliding across the floor and armed with the kitchen knife, the real Soavi falls through the doorway, dead. The killer stalks after Betti, who narrowly after shooting the killer away while in darkness and slipping out through a vent, with a girl in the adjacent apartment helping her slip through and run back to the opera house. She tells everything to Marco, who says he has a plan to catch the killer in the next show, while lamenting to Shakespeare. Betti secretly worries about what the killer maybe has to do with her mother and what it must mean for her. Betti cautiously gets back on stage as Lady Macbeth, fearing like Marco that the killer's in the audience. It's confirmed when Marco's plan works, the raven's are released to seek out the killer that murdered their fallen relatives. One singles the killer out so well, and his left eye is pecked out and eaten. Santini then stands up with the hollow, bloody eye socket, revealing him as the murderer all along.

Marco and Betti's brief rejoice over Marco's "genius" is cut off by Santini shooting at the stage. Betti and Marco dodge the bullet, but the set is destroyed, one of the costumed performers is murdered from one shot, and the audience runs for their lives with the cast and crew in disastrous chaos. Betti and Marco go back to her dressing room and wonder what Santini's motive is. Santini then jumps out and holds the pistol to Marco's eye, before knocking him out and roughly kidnapping Betti. As he drags her to a record room, he grips her tightly and hisses infatuation over her because she looks like her mother so much. Betti can't get away and is dreadfully shocked. When they get to the room, she's tied and blindfolded, Santini continuously caressing and groping her while recounting his crimes with her mother and the crimes he did after flashing back from looking at Betti. He them lights a match and threatens her with arson, pouring gasoline on the floor. He then puts the gun in her hand and demands her to shoot because he looks vile from his crimes and his missing eye. When she refuses, he goads with one last revelation, that he murdered her mother when she was too demanding over their sprees together. This is enough for Betti to shoot, burning what's presumably his corpse and the records in the opera house. Betti at first struggles to get out from the locked door, but eventually, she smashes her way out of the burning room.

Months later, she and Marco are in the Alps in his vacation home, to recover from their mutual traumatic experiences. While Betti's outside, Marco's horrified not only finding out the "corpse" is a mannequin, but the housekeeper's knifed to death. He screams at Betti to run and that Santini's still alive, which she does when Santini lunges after her. Marco comes to her rescue, but after a scuffle, where Betti concedes in trying to fight, Marco's stabbed to death as well. Then Betti tricks Santini long enough to believe she's agreeing to the "games" and being "just like mother". When the Swiss close in, she knocks Santini down with a rock and takes back her statement. While Betti rests in the field, Santini's dragged off by the police, with multiple guns in his face, sealing his fate in being sent to prison for his crimes. 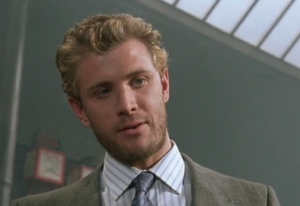 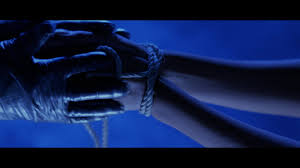 Santini with Betti's mother during their murder "games". 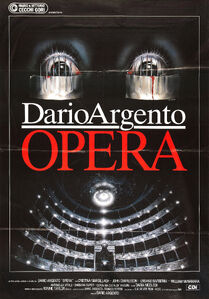 The signature nails taped under eyes Santini used in his torture, shown in the movie poster.

Santini shooting Mira through the peephole. 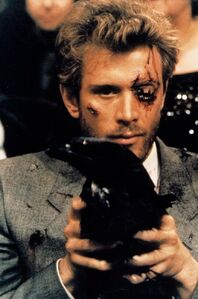 Santini and the ravens. 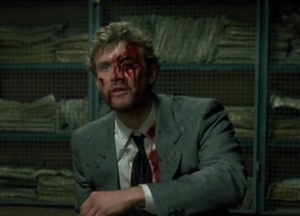 Santini shown as the killer, with his pecked-out eye. 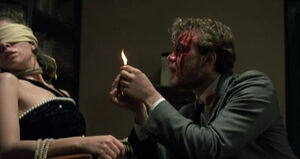 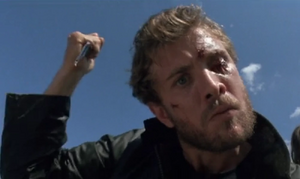