Cerberus (by fans while in Beastform).

Wipe out all half-breed beastmen by turning them into humans
Continue to rule over humanity from the shadows (both failed).

Alan Sylvasta (アラン・シルヴァスタ Aran Shiruvasuta) is the main antagonist of the anime Brand New Animal by Studio Trigger. He is the CEO of Sylvasta Pharmaceuticals, which owns a hospital in Anima-City, a place where beastmen live. Despite appearing human, Alan is in fact, a pureblood beastmen who seek to eradicate half-breed beastmen and maintain his and his brethren's rule over humanity from the shadows.

He is voiced by Kaito Ishikawa in the original Japanese version and by Robbie Daymond in the English dub who previously voiced Goro Akechi from Persona 5 and Toneri Ōtsutsuki from The Last: Naruto the Movie.

Alan's human form is that of a man with blonde hair, light-blue eyes, and light skin. He is usually seen wearing an aegean-colored suit, a yellow waistcoat, a white undershirt, and navy-colored shoes.

In his beastman form, Alan has wolf ears and yellow fur with a white muzzle.

In his ultimate beastman form, Alan is a gigantic, three-headed wolf with shining, golden fur which can blast powerful laser beams capable of blowing up buildings.

Much of Alan's backgrounds remained a mystery, only that he learned that he is a pureblood beastmen and aspired to rid his brethren of half-breeds (beastmen who intermingled with humans) and maintained their place as the gods over humanity in shadows. He also learned Raymond Sylvasta' past exploits and how to sow humanity's prejudice against beastmen over the years.

Throughout the show, Alan makes small appearances throughout, commenting on the events happening in Anima-City. He also keeps a close eye on the show's main character Michiru Kagemori and her abilities. He is able to convince everyone that he is a regular human and gains the trust of the city's mayor, Barbaray Rose. One person, however, is wary of him, and that is the city's guardian, Shirou Ogami.

When the Church of the Silver Wolf led by what seemed to be Ginrou arrived at Anima-City, Alan happily accepted them despite Mayor Rose's objections. It is later revealed that the cult's Ginrou is Michiru's friend Nazuna, and she tells her that she and Alan are working together to give the beastmen something to believe in.

Towards the end of the show, Alan reveals to Shirou that when beastmen of different types come too close to one another, they get stressed, mutate, and go berserk a phenomenon he calls "Nirvasyl Syndrome" after the ancient beastman-only city of Nirvasyl where this same thing happened. Alan also reveals that his ancestor Raymond Sylvasta killed all the beastmen living there because they were getting too violent. He plans to use the blood of the mutated beastman to create a serum that will revert the beastmen of the city into regular humans. Suspicious with his intentions, Shirou angrily objects to this idea.

One night, Nazuna decides to hold a concert for all of Anima-City. Here, she plans to reveal that she was once a human like Michiru. Shirou, however, reveals that this revelation will cause all the beastmen watching to go insane with Nirvasyl Syndrome, so Michiru goes to Nazuna to tell her not to tell anyone. She doesn't, but her right-hand man Boris does, and all the beastmen start mutating. Boris later reveals that he was working for Alan.

In the final episode, Alan releases robots to tranquilize everyone and reveals the truth, as he plans to wipe out all the "half-breed" beastmen in the world with the serum and keep the "pure-blooded" beastmen like him around so they can reign supreme over all. He becomes a gigantic three-headed beastman wolf and fights Shirou, who, earlier, was revealed to be the true Silver Wolf all along. After an intense struggle which results in Shirou pinning Alan to the ground, Alan starts to show off signs of Nirvasyl Syndrome himself, proving that, despite being a pure-blood, he is not exactly an elevated beastman.

Earlier on in the show, it was revealed that Michiru's blood has the capabilities of curing Nirvasyl Syndrome, and she gave some of this blood to Shirou. When Shirou pins Alan to the ground, he is about to kill him, but in the end, decides to be merciful. He allows Alan to bite him, thus passing the cured blood from himself to him, and Alan reverts to his normal self, defeated. Every beastman who was mutated is given the cure, and things go back to normal.

Alan is no longer seen after this, but Mayor Rose reveals that he has gone into hiding, his reputation ruined by what he has done. His current whereabouts are unknown, though it is likely that he is somewhere plotting his revenge, possibly as a secondary threat should a second season of Brand New Animal be announced. 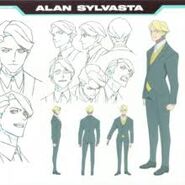