Staging atrocities in order to make his documentaries more "exciting".

Complete his documentary and become famous.(failed)

Despite being the central character (and at first assumed as a victim), he was in fact completely unsympathetic, and documentary footage revealed the truth about what he and his crew mates were really doing, as well as the disgusting and unscrupulous monster he was.

He was portrayed by Carl Gabriel Yorke.

Alan was a director who toured the world alongside his crew (made up of three friends). While outwardly a normal film-maker - Yates was actually ruthless and racist with signs of sociopathy, often he would film as he and his crew deliberately created atrocities so as to make a profit from the footage: he would film such unforgivable acts as rape, murder and torture with the aim of becoming famous - he also viewed the natives as "monkeys" and horribly abused them all.

Alan and his crew however would make a fatal mistake when they attempted to cause mayhem in the Amazon jungle - attacking a group of peaceful villagers and forcing them into huts which they proceeded to burn, filming while the terrified natives tried to escape (some had burned to death): after destroying the village Alan and his crew moved on to track down the mysterious "tree people" - a tribe that was said to engage in cannibalism.

Knowing that the tribe were not aggressive and would only attack if sufficiently provoked, Alan and his crew captured a woman from the tribe and gang-raped her, filming the scene - at this point the Alan's girlfriend (Faye Daniels) grew angry at the group for wasting film and called them all "bastards" - trying to fight them off but simply being tossed aside.

Later on, Alan films as the woman they had raped is found impaled to a wooden pole as punishment by the "savage" tribe (though it is heavily implied this is a staged atrocity by Yates and not the actual tribe, meaning he not only raped the woman but had her impaled off-camera, to show how "brutal" the tribe was)- Alan and his crew are remorseless and even smirk (aside from Faye, who is still displeased with Alan's "reckless" behavior).

The "tree people" had enough of Alan and his crew for slaughtering them and soon ambushed the filmmakers, managing to spear one of Alan's friends (Jack) - who Alan simply shoots while recording as the tribe castrate him and tear his body apart before devouring him.

Mark then films as Faye is captured by the frenzied tribe: this is the first time Alan actually shows concern and is even willing to forget about the film to save Faye, but is convinced to follow them and keep filming. Alan and Mark watch as Faye is gang-raped by the tribesmen and beheaded.

Finally Alan meets his own demise when the tribe swarm him, the camera falls to the ground alongside Alan's blood-covered face, moments before the footage cuts out.

After viewing the footage the directors decide to have the footage burned and the movie ends with one of the scientists (who had viewed the footage) asking himself who the true savages were.

Alan Yates was an arrogant, racist, xenophobe, violent, and sociopathic person who saw other humans as little more than victims to be filmed in order to earn him fame as a director. His documentaries were almost always staged and he had no problem in paying people to commit atrocities or engaging in such actions himself if he felt it would "improve" his documentaries - he was also extremely sadistic and treacherous, as he was seen grinning and laughing during scenes of intense violence (including rape and murder).

Alan Yates was also insane, as he happily videotaped the deaths of his own friends instead of trying to flee (though he did show objection to Faye's death at first, until Mark convinced him to continue) - his obsession with bloodlust would be his demise, and ironically his final victim would be himself. 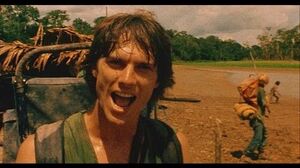 Cannibal Holocaust (1980) – Who Are The Real Savages?
Add a photo to this gallery

Retrieved from "https://villains.fandom.com/wiki/Alan_Yates?oldid=2942192"
Community content is available under CC-BY-SA unless otherwise noted.