Alana Bloom is one of the main characters in the NBC television series Hannibal. She is a psychiatrist who is the former love interest of protagonist Will Graham, and the former lover of the titular antagonist Hannibal Lecter, who becomes the crux of her villainy.

She is portrayed by Caroline Dhavernas in the television series.

Initially, Alana is shown to be very professional, intelligent and reserved. She performs her duties as a psychiatrist by the book, which is generally effective, but fails with certain dangerous patients, such as Abel Gideon. She is very defensive of those she cares about, which serves as a boon for those struggling, such as Will Graham, but can also be utilized as a factor of manipulation by deceitful characters, like Hannibal Lecter. While she has strong reservations, Alana is willing to engage in romantic and sexual behaviors, which also has played significantly into her relations with Will Graham and Hannibal Lecter.

Following her maiming and subsequent corruption, Alana takes on a remarkably different personality. She is shown to be icy and sardonic, which is underlined by her new-found obsession to see Hannibal Lecter pay for manipulating, seducing and maiming her. Contrasting her original outlook, Alana is willing to break the law and engage in unscrupulous behavior to see her objective fulfilled. However, witnessing her plans put those she cares about in danger supercedes her corrupt intentions.

Alana went to school to secure a PhD in Psychiatry. While there, she studied under Hannibal Lecter, who she came to respect as being a great mentor, colleague and friend. However, the two of them had differences in approach, as Hannibal was very organic and orthodox in his methodology while Alana was a star pupil who followed textbook principle to the letter. Nonetheless, Hannibal prized Alana for maintaining an exceptionally distinct personality.

Alana graduated with a PhD and went on to become an esteemed psychiatrist, guest lecturer and FBI consulting profiler. Through her work, Alana met forensics expert Will Graham and the two shared a romance. However, Alana came to realize that while Will was exceptionally bright, he was unstable and prone to go too deep into the darkness he analyzed, so she broke off the relationship, but the two remained friends.

When Hannibal frames Will for his crimes, Alana is torn between her lingering feelings for the latter and her loyalty to the former. Hannibal manipulates her into "helping" Will by having him institutionalized. Will is eventually found innocent, but the tension between the three remains. In the second season finale, Alana learns that Hannibal is a serial killer and has been manipulating her all along, and so tries to help Will bring him down. She pulls a gun on Hannibal, but his "protégé" Abigail Hobbs attacks her and throws out of a window.

Following Hannibal's betrayal and her maiming, Alana slowly recovers from her grievous injuries. As the fractures send bone marrow into her bloodstream, Alana's personality takes an indefinite shift and she becomes more ruthless. Frederick Chilton, looking for an ally in his quest to have Hannibal admitted to the Baltimore State Hospital for the Criminally Insane, approaches Alana, but she displays no interest in furthering his goals and taking the legal route.

Alana is released from the hospital, but now has a permanent limp. She meets with Will, but is given the cold shoulder from her disturbed former love interest. She then approaches Mason Verger and strikes a deal with him, in which she will provide her psychiatric expertise in exchange for watching Hannibal suffer. In the meantime, she develops romantic feelings for Mason's sister, Margot.

An Italian inspector with previous history with Hannibal, Rinaldo Pazzi, discovers where his old adversary is and calls for Mason's bounty. Alana clarifies to Pazzi that Hannival's capture will lead to his torture and death. After the phone conversation is over, Alana points out to Mason that Pazzi would certainly die at Hannibal's hand, which he did within the short time after.

Alana and Margot become lovers and engage in passionate sexual encounters. During these, Alana admits that she has no intention of seeing Hannibal dead, but that she wishes for him to be tortured, then apprehended by the FBI.

Utilizing her intimate knowledge of Hannibal, Alana determines where Hannibal's psychiatrist and lover, Dr. Bedelia Du Maurier, has been shopping in Florence, Italy. Mason utilizes this lead to have the Italian police capture Hannibal and Will, while killing Jack off as a witness.

Hannibal and Will are brought to Muskrat Farm, where the two are to be tortured and horrifically murdered. After Margot is told by Mason that her eggs have been placed in a surrogate, Alana joins her to see that Margot's dead fetus is resting inside a pig. Realizing that not only Jack was ordered to be killed, but that Hannibal and Will would suffer undeserved fates, Alana decides to adjust her course and redeem herself. She frees Hannibal, who promises to save Will, though his testament about upholding promises is implicit that he will eventually see her dead. Thus, Hannibal murders every person loyal to Mason and brings Will to safety. Meanwhile, Alana and Margot confront Mason about his sick joke about the "surrogate" and murder him by pushing him into his eel tank, where his pet eel forces its way down his throat.

Three years after Hannibal's arrest and public infamy, Alana is the Administrator of the Baltimore State Hospital for the Criminally Insane. She is still romantically involved with Margot, with whom she had a son by utilizing Mason's sperm. As Hannibal was sentenced with an insanity plea, Alana is bemused and frustrated with his incarceration. She visits with Hannibal, who continues to make thinly-veiled threats about her demise.

When the serial killer and mass murderer Francis Dolarhyde comes to prominence as the unidentified "Tooth Fairy" killer, Alana collaborates with Will and Jack to apprehend him. Realizing that Hannibal has secretly been advising the Tooth Fairy, who is using the guise of his lawyer, Alana threatens Hannibal to be stripped of his amenities, unless he cooperates in capturing his pupil. However, Hannibal betrays his former friends and warns Dolarhyde that he is being pursued. As such, Alana removes every one of Hannibal's amenities, including his toilet.

Alana devises a plan with Will and Jack to capture the Tooth Fairy by humiliating him through an interview with Freddie Lounds, but knowing the peril of such action, she tasks this to Chilton. After Chilton has been mutilated, Hannibal antagonizes Alana for her cowardice, which she does not argue against. Alana visits a charred and lipless Chilton in the hospital, who she taunts for always being insecure and the least adept for managing against Hannibal.

Will devises a plan in which Hannibal is released from the Baltimore State Hospital for the Criminally Insane, which is designed to draw Dolarhyde out. When Alana explains the plan to Hannibal, he explains that Alana has been living on borrowed time, along with her family. Feeling threatened and in danger, Alana moves from the Verger Estate, along with Margot and her son. 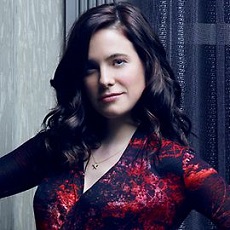 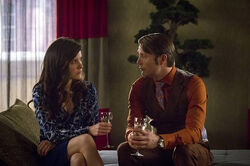 Alana is seduced by Hannibal.

Hannibal and Alana in bed together. 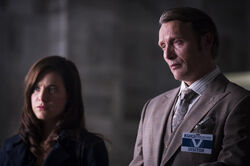 Alana unwittingly supports Hannibal in his offer to "help" Will. 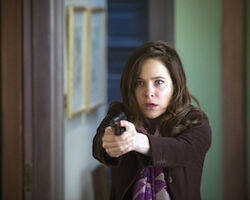 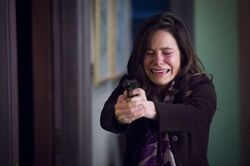 Will attempts to comfort a maimed Alana. 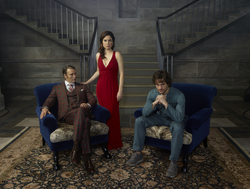 Alana with Hannibal and Will.
Add a photo to this gallery

Retrieved from "https://villains.fandom.com/wiki/Alana_Bloom?oldid=3769667"
Community content is available under CC-BY-SA unless otherwise noted.