Alba is a monkey largely covered with white fur (except for his face, hands and feet), the leader of the other monkeys (who are mostly covered with apricot or peach-colored fur).

Alba is the principal lackey/tipster to Shere Khan and Grizzle. They also work for the tiger and wolf. Louis and the other monkeys constantly wreak havoc in the jungle and heckle the denizens. After Louis convinces and lures Mowgli away by telling him that he knows of a place where he can take him to learn more about the boy's kind, he and the other monkeys formed links or chains and carried Mowgli across the jungle to a temple (also known as "The Cold Lair"), where the boy learns about it having once been occupied by humans and how they showed their negative side, and qualities, when it came to greed for treasure, as they searched for it in the edifice.

Some also tricked Kichi into playing with them as an attempt to draw her/him into Shere Khan's clutches, and the monkeys also bother Mowgli again when the wolves act coldly towards him, and later destroy his hut. He, along with several, other monkeys, harass Mowgli and demolish his hut under the order of Shere Khan and Grizzle. He is eventually caught and confronted by Mowgli, Bagheera, Baloo and Kaa, who warns him to put an end to that and turn down any other instructions Shere Khan and Grizzle may give him. Following this encounter, the monkeys in league with Shere Khan flee whenever they see Mowgli, and they (or a similar band of monkeys) make their final appearance kidnapping Jumeirah, dropping her and fleeing when Mowgli comes to her rescue.

It is unknown what happened to Alba afterwards. 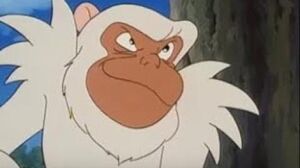