Join with U-DO and exterminate the human race.

Albedo Piazzolla (in Japanese: アルベドˑピアソラ Arubedo Piasora) is one of the main antagonists of the sci-fi video game series Xenosaga.

He is U.R.T.V. Unit 667, and one of the only surviving U.R.T.V.s from the Miltian Conflict. He is the biological brother of Gaignun Kukai, Jr.

Albedo was a tragic, tortured, and misunderstood soul who desired nothing apart from the empathy and love of his twin brother, Rubedo.

Since birth, Albedo had always demonstrated fairly unnatural behavoir, as seen in his abuse of clinginess toward his brothers, and overly sensitive emotions. With this, it is deductable that Albedo never possessed complete sanity. However, his insanity did not truly show its true colors until Albedo learned of his inability to die, meaning that he would be left behind when his siblings passed away. Upon discovering he may lose the ones he cares for, Albedo began to fall apart mentally. However, his true insanity did not awaken until he linked with U-DO, and upon doing so, went completely and utterly ballistic. In Episode III, when Albedo is free of his boundment to life and comes back as a Testament, it is still obvious that he is far from sane. However, it is also noticeable that he is no longer suffering from it and that it is now very much under his control. 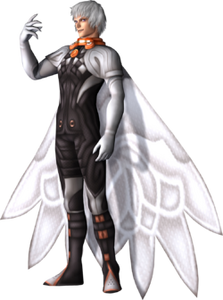 Retrieved from "https://villains.fandom.com/wiki/Albedo_Piazzolla?oldid=3886442"
Community content is available under CC-BY-SA unless otherwise noted.