Killing soldiers and taking credit for their accolades

Military Impostor
Albert is a one-time villain from the FOX animated sit-com, Family Guy, only appearing in the episode "Peternormal Activity". He is an old war hero who worked at the Quahog mental asylum. Peter, Quagmire, Cleveland, and Joe killed him, thinking he was a murderer. At the end of the episode, it was revealed that he was a Ku Klux Klan member, who lied about being a war hero.

In "Peternormal Activity", Peter, Quagmire, Cleveland and Joe went to the old Quahog Mental Asylum to write scary stories. However, they started to scare themselves with these stories and when they tried to get out, they got lost.

Eventually, an old man with a hook for a hand showed up, which terrified them. They guys all started running but then Peter realized that they outnumbered this villain so they ran back and beat him up. Eventually, they realized that this guy wasn't the monster they thought he was as they discovered he was just an innocent old janitor, who was trying to help them find the exit. With his dying breath, Albert said that he lost his arm in Korea, saving the lives of 6 men. Albert died then and there, letting the guys know that they killed an innocent man, who, to add insult to injury, also happened to be an elderly amputee who was also a veteran.

Peter, Quagmire, Cleveland, and Joe buried the dead body and swore never to tell anybody what happened. This freaked them out for the rest of a few weeks, as they had to sit on the fact that they all murdered somebody and they were all paranoid that somebody might find out.

Peter resolved everything when he turned this whole horrible ordeal into an idea for a horror story. They adapted this incident into a movie, which was really good.

On their way out of the theater, the guys came across a newspaper, which stated that a local KKK leader went missing, accompanied by a picture of Albert. The news also mentioned that he stole the war medals he owned. This revealed that Albert was a racist Klansman and also exposed him as a liar, who never fought in Korea, let alone saved anyone's life. This came as a relief to the guys, because now that they knew the man they killed was actually a racist and veteran impersonator, though they still killed an elderly man who posed them no harm. 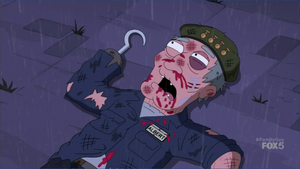 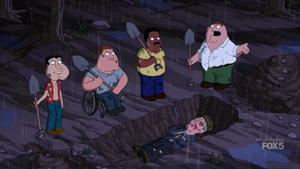 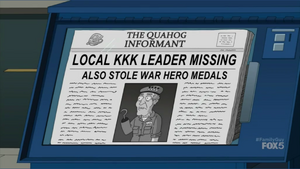 Add a photo to this gallery
Retrieved from "https://villains.fandom.com/wiki/Albert_(Family_Guy)?oldid=3837786"
Community content is available under CC-BY-SA unless otherwise noted.