Steal whatever he wants and get away with his crimes (failed).

Albert Chung is a minor villain in season three of Dexter.

It's currently unknown as to who portrayed him.

Albert Chung is first heard of after he had broken into an elderly woman's home to steal some of her belongings and when she spots him, he pushes her down a flight of stairs, most likely breaking several of her bones in the process but not killing her. He was caught but was able to afford prosecution thanks to the help of Ellen Wolf, a defense attorney willing to help anyone be set free no matter what crimes they did if they paid.

Six months later, Albert then broke into the house of Lisa Morton and when she caught him like the old lady before, but this time strangling her to death with his bare hands. He ran out of the house soon after this, but left bloody footprints behind since he was only wearing socks. Once again, Ellen Wolf tried to get his crimes lessened and gets into a heated argument with Miguel Prado about it, with Maria LaGuerta later helping Ellen Wolf arrest Albert. 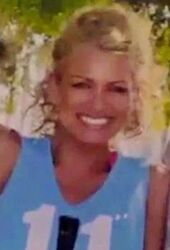 Lisa Morton, victim of Albert Chung.
Add a photo to this gallery

Retrieved from "https://villains.fandom.com/wiki/Albert_Chung?oldid=3944417"
Community content is available under CC-BY-SA unless otherwise noted.