Acquire as much organs as he can and donate them to make money. (Succeeded until death)

Albert Contiello is one of the Psychopaths encountered by Nick in the story of Dead Rising 3. Formerly a doctor by trade, Albert has resorted to harvesting organs from various people he abducts to make a profit amidst the chaos. Fitting with the Psychopaths embodying the Seven Deadly Sins, Albert is Greed (although it must be noted that Albert is the only one of them who will be encountered and confronted in the game's main story while the others are optional).

While inspecting a basement area, Nick is attacked from behind and subdued when Albert jams a syringe into his neck. When Nick comes to, Albert tends to a female captive and states that he is now an "entrepreneur" in the midst of the outbreak. With a surgical saw and his best equipment, Albert has been harvesting organs from innocents to sell on the open market. Nick sets out to confront Albert, but the effects of the drug bear down on him. Even worse, the drug makes other captives appear like Albert, giving the mad doctor a chance to continue harvesting while Nick may attack a captive.

Despite the drug's influence, Nick manages to defeat Albert and jam his syringe into his throat. Getting a taste of his own medicine, Albert hallucinates, seeing zombies of his victims coming for his precious organs. From his perspective, Albert fights them off with his surgical saw. In reality, Albert guts himself with the blade and bleeds to death, while telling his nonexistent attackers that they can't have the organs. (along with Sean Keanan, Antoine Thomas, & Brandon Whittaker) Right to his death, Albert is considered one of the darkest Psychopaths in the series, thus far. 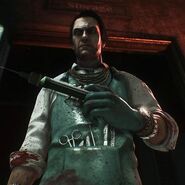 Albert Contiello's demise.
Add a photo to this gallery

Retrieved from "https://villains.fandom.com/wiki/Albert_Contiello?oldid=3833631"
Community content is available under CC-BY-SA unless otherwise noted.