Hunting either for fun or to feed "Dorothy".

Kill as many people as possible and keep "Dorothy" alive.

Albert Lester is an antagonist in the video-game Resident Evil: Outbreak File #2.

He was the director of a hospital in the Raccoon Forest and lived in an old cabin with his wife Dorothy until she got cancer. Lester bought anti-cancer medicines from Umbrella Corporation, but the medicines were derived from the T-virus, that transformed Dorothy in a zombie, infecting the entire hospital, except Albert since he got infected by the unknown experimental virus that granted him inhuman abilities while keeping his personality and consciousness. He lived decades alone in that abandoned place, and this severely affected his mind. A plant that lived in the intensive care unit (where the dead Dorothy was) mutated thanks to T-virus, turning the plant into a colossal carnivorous plants that ate Dorothy's body, and Lester believed that his dead wife reincarnated into the monster plant. Lester spent hunting animals and later, people (due to his mental problems), to feed "Dorothy". This made him a serial killer called the "Axe Man".

In September 1998, during the Raccoon City viral outbreak, the reporter Alyssa Ashcroft (that investigated the hospital years later, but forced herself to forget that horrible things) and other two survivors (the player decides who will be Alyssa's partners) flee to the forest thinking that there is safer than the zombie-infested town. But they are hunted by poisonous zombies, giant wasps and giant earwigs, and decides to hide and rest in the old cabin in the woods. Lester suddenly appears, as a simple old man that tells them to go to the hospital because there is safer, but during the trail to the hospital he disappears. Alyssa and the others find the hospital and decide to don't go back because the woods are too dangerous. But inside the abandoned hospital, Lester appears as the Axe Man and chases the survivors into the sinister construction.

But later, they found the back exit, but the vines from "Dorothy" are blocking the door. The only way to open the door is killing the vines, for do this, they have to kill the monster plant. As the hospital was very old and about to collapse, the plant maintained its walls and the ceiling, but when the survivors killed the plant she stopped to support the building, causing it to slowly starts to fall. When the plant died, she spat out Dorothy's body, and Lester decided to stay with his wife (even if dead) and the roof collapsed on him, killing him. 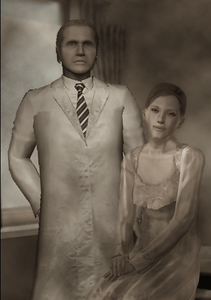 Al and Dorothy when young.

Albert before he went insane. 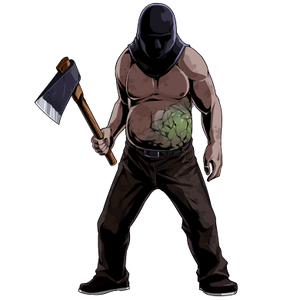