NOTE: This article is about the incarnation of Albert Wesker from the film Resident Evil: Welcome to Raccoon City. The mainstream version can be found here: Albert Wesker.

Steal the G-virus samples from William Birkin and escape from Raccoon City (succeeded).

Albert Wesker is the secondary antagonist of the 2021 horror film Resident Evil: Welcome to Raccoon City.

He is a police officer at Raccoon Police Department and captain of the S.T.A.R.S. Alpha Team. Before the events of the film, he was approached by a mysterious woman who asks him to do a job behind his fellow teammates' back - find a research lab belonging to Dr. William Birkin.

The character was portrayed by Tom Hopper, who also played Declan Smith in SAS: Red Notice and Magnusson in Hitman's Wife's Bodyguard.

Wesker was recruited as the head of the Raccoon Police Department's Special Tactics and Rescue Service, an elite tactical law enforcement division where he was assigned to the Alpha team. There, he became friends with Chris Redfield, Richard Aiken, and Brad Vickers, as well as romantically involved with Jill Valentine, one of his colleagues. In September of 1998, Wesker led the investigation into several missing persons cases in the city's outskirts.

On the 30th, Wesker, Jill, and Richard are hanging out at Emmy's Diner. Wesker teases the unconscious rookie Leon S. Kennedy, by placing a ketchup bottle on his head and betting ten dollars with Jill that she can knock the bottle over with a toy gun. Jill changes the bet by claiming that she can knock the bottle over for twenty dollars without looking. Wesker accepts the bet, Jill shoots him in the forehead and throws the toy gun at Leon, causing the bottle to fall off and snatches Wesker's sandwich, who was unimpressed.

Wesker, Jill and Richard head back to the station and hangout in their office with Chris and Brad. The Chief of Raccoon Police Department, Brian Irons, demands their attention and informs them that they lost contact with Bravo Team. He tasked them with Investigate the Spencer Mansion about Bravo Team's disappearance. Wesker recevies a message on his pager and heads to his locker, where he finds a portable computer that informs him that everything he needs on the device and that Raccoon City will be destroyed in 6AM.

The Alpha Team arrived at the Arklay Mountains, where they found Bravo Team's crashed vehicle and head inside the Spencer Mansion. Wesker has the group to split up, searching east with Wesker and Chris and Richard searching upstairs and spotted a trail of blood. Wesker and Jill enters the mansion's library and follows the instruction on the device to use the piano to play Moonlight Sonata, which opens a passageway between two bookshevles. Jill is then struck by the lights of Brad's helicopter, but notices that he's about to crash into the library.

Wesker and Jill climb out of the wreckage and digs the device out of the wreckage. While Jill is saddened of Brad's death, Wesker is focused and shocked on the passageway. Jill questions about his strange behavior, Wesker reveals to her that several months ago he was contacted by an unknown group that hired him to collect Umbrella's old research for money that he hoped to use to leave Raccoon City. Jill is hurt to hear Wesker is willing to betray and abandon his long time friends for money. She tries to convince him to help her to go find Chris and Richard, but he refuses and pulls his gun out and kills the zombie that killed Brad. The zombie rises up again and is put down by Wesker before walking down the passageway and leaves Jill behind.

While he continues to explore the tunnel, he arrives at Dr. Birkin's lab, where he explains to William that he is only there to retrieve the G-virus samples. William pretends to surrender the case and grabs his gun and shoots Wesker. He is then shot multiple times in the chest by Wesker and Annette and Sherry rushes to William as he collapses to the floor. William tells Annette to grab the samples while Sherry hides. Wesker tells her not to do anything stupid, but grabs the gun and tries to shot him, only for her to be killed by Wesker in the process. Wesker is shocked about killing Annette and realizes that Sherry disappeared. He notices William is still alive and approaches William, yelling that it didn't have to be this way, but he merely laughs mockingly in response, dropping a syringe, and Wesker discovers that he has just injected himself with a vial of the G-virus. Wesker then shoots him several more times.

Wesker reaches out for his gun and sees Sherry holding her father's gun, he is shot from behind by Jill. She approaches the dying Wesker and tries to help him, but he refuses since he betrayed his friends and wasted his life for money and deserves his fate. He also warns her that Umbrella plans to destroy the city and that there is a train at the other end of the compound used by Umbrella for transporting their materials. He uses his dying breath to apologize to Chris for his betrayal and tells Sherry that he wouldn't be able to pulled that trigger on her.

In the mid-credit scene, following Raccoon City's destruction and the group's departure, Wesker wakes up in a body bag and collapses on the floor as his body adjusts from the reanimation. He closes his eyes as he is sensitive to light in the room and is approached by a lady in a trenchcoat who introduces herself as his contact. When he asks about his death, she informs him that his body was recovered from the lab and was revived by a mutagenic retrovirus. She gives him a pair of sunglasses and introduces herself as Ada Wong. 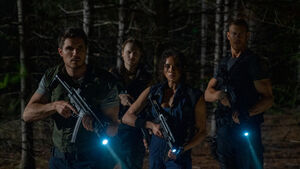 A promotional image of Alpha Team at the Arklay Mountains.

Alpha Team in the Spencer Mansion.