Journey to the Center of the Earth

Hunt down and kill anyone for food.

Its vocal sound effects were provided by Pascal Beaudin.

Despite being the main antagonist, its role in the film is small. The Albino Giganotosaurus was a giant, aggressive dinosaur that ravaged and killed anything that it could find including creatures or humans alike. When Trevor's brother and Sean's father Max Anderson went to the center of the Earth, he was attacked by the dinosaur. The Albino pursued Max through the caverns until a fissure vent opened in the ground. Max successfully jumped across until he fell to his death into the cavern below. The dinosaur does not appear again in the entire film until the climax, but it is assumed that it targeted more creatures and killed them during the years that passed.

When Trevor, Sean and Hannah Ásgeirsdóttir journeyed in the center of the Earth, they become separated after venturing through the sea. Sean comes across a boneyard and encounters many bones of animals (possibly previous victims of the Albino) that are scattered around, but hears roaring in the distance and hides. The Albino somehow finds Sean and drools on his face before chasing him as Trevor and Hannah get closer to the boneyard themselves.

Eventually, the Albino trapped Sean in a small crevasse and attempted to kill him, but he is saved by Trevor. The two reunite and both head for the geyser, but the dinosaur smashes through the wall and catches up to them through a Muscovite field. During the chase, the Albino pursues Trevor, but accidentally runs on some Muscovite which causes the ground to collapse under its footsteps. Although the dinosaur falls to its death into the darkness below, Trevor survives the fall and reunites with Sean before they continued toward the geyser where they eventually meet up with Hannah.

The Albino Giganotosaurus is a dangerous, aggressive and savage predator who is well known for stalking, hunting and killing prey and tries to kill anyone for food when it sees as it is constantly on the hunt and quick to attack others. Despite its small role and being a stealthy predator, the dinosaur is also an extremely fast pursuer as it was able to catch up to Max at the beginning of the film and later Trevor and Sean in the climax. 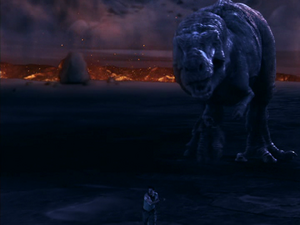 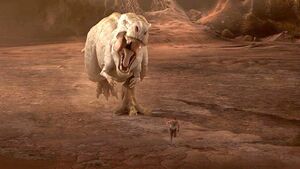 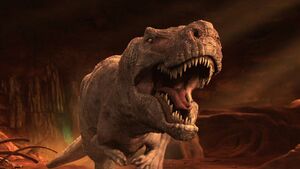 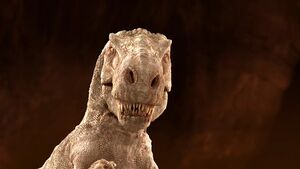 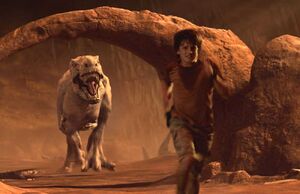 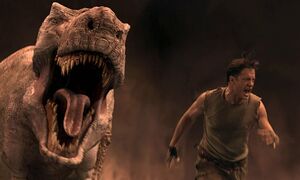 Retrieved from "https://villains.fandom.com/wiki/Albino_Giganotosaurus?oldid=4276863"
Community content is available under CC-BY-SA unless otherwise noted.