Prisoner in the Phantom Zone (formerly)

Consume an entire crew of a ship (both succeeded).
Kill Clark Kent to eat him (failed).

Aldar was a villain in the Sixth Season of Smallville, appearing in the episode "Static".

A humanoid alien from the Phantom Zone, but not a wraith, who fed on human bone marrow, regularly breaking the backs of humans so as to rip out their spines. He was predatory and saw humans as simply another source of food.

Aldar murdered many people to eat and consume their bones. For this heinous act, he was imprisoned in the Phantom Zone. While trapped in the Zone, he had kept his human form.

After Clark accidentally opened the gateway to the Phantom Zone, Aldar escaped his imprisonment and landed in Seattle, Washington, and started consuming an entire crew of a ship docked at the harbor.

He would rip open the flesh of the victims, tear out all the bones and suck out their bone marrow. Wile lurking on the docks, Aldar encountered a policeman and kills him by ripping his bones out.

He later encountered by Clark who, at first, seemed to match him in strength. Clark tries to use the Crystal, but it has no effect — Aldar is a Phantom Zone prisoner, but not a phantom. Aldar then threw Clark across the dock and escapes.

Aldar ultimately managed to throw Clark into the upper regions of a crane, generating tremendous momentum, and then disappeared quickly; this could mean that Aldar was also able to run at superhuman speeds, but it was not shown on screen.

Clark searched all day for Aldar until nightfall. He found him again and Aldar picked him up, ready to rip his bones out.

Aldar was once again encountered by Clark, this time in the city, Clark asked him why he was killing people, Aldar responded by simply saying "Hey, a man's got to eat." Clark attempted to fight the monster but Aldar easily caught his punch, lifted him over his head and attempted to snap Clark in half.

Just as Clark is almost finished, Aldar falls in agony, dead. He was killed by someone with great powers, later revealed to be the Martian Manhunter. Clark was shocked to see a hand print burned onto Aldar's back. 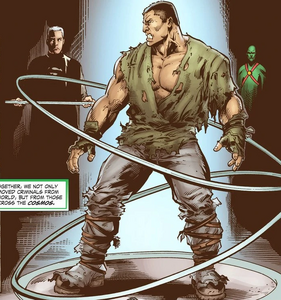