Leader of the Dust Men of Empire City's Warren District

Enhance his powers with the Ray Sphere.
Kill Cole MacGrath and Zeke Dunbar (both failed).

Alden Tate is a major Antagonist in the video game InFamous, and the second of the three supervillains that Cole must face; a powerful mentalist, he rules over the Dust Men who have seized control of Empire City's Warren district in the wake of the Ray Sphere explosion.

He was voiced by Jason Cottle, who also voiced Cole MacGrath in the same game.

Alden Tate was groomed from a very early age to succeed his father Richard as leader of the First Sons; having discovered his telekinetic powers in childhood, Alden seemed the natural choice to command the notoriously Conduit-centric group. However, the arrival of Kessler brought an end to the young mentalist's bright future: staging a coup within the First Sons, he usurped the leadership and seized control of the group from within - presumably killing Richard in the process. Alden himself was exiled from the ranks of the faction he was groomed to lead and abandoned on the streets of Empire City.

Left homeless and with nobody left to turn to, Alden's telekinetic powers gave him the edge he needed to survive, and his hatred for Kessler gave him a reason to live on. Vowing revenge on the First Son's new leader, Alden spent the next few decades living among the other vagrants of Empire City, maintaining a low profile despite his powers - for fear that Kessler might still be after him.

However, the explosion of the Ray Sphere changed everything: Alden, now an old man, found his telekinetic abilities enhanced immensely by the power of the Sphere, enough to launch city buses into the air and create golem-like suits of animated armor. Inspired, he rallied the homeless citizens and newly-empowered Conduits of the Warren district into an army of trashbag-clad soldiers known as the Dust Men, and set out to seize control of the city; with most of the city still under quarantine and the police hopelessly outnumbered, the Dust Men quickly took over the Warren district.

Capturing engineers and technicians from across his new territory, Alden set them to work on building a colossal tower of scrap metal in the heart of the district; meanwhile, the Dust Men successfully retrieved the Ray Sphere from John White and brought it to the tower for the next stage in their leader's plans. Judging from Alden's deranged rantings, he was intending to enhance his powers even further, allowing him to animate the tower as his new body - a colossal golem that would allow him to take his ultimate revenge on Kessler.

Events of the Game

Cole MacGrath first encounters Alden Tate soon after entering the Warren District. Having been instructed by Trish to act as an escort for her bus while en route to the hospital, Cole is taken by surprise when a bazooka-wielding Dust Man blasts him off the vehicle, allowing Alden to telekinetically lift Trish's bus into the air and deposit it on the roof - likely intending it as a warning for Cole not to interfere in his plans.

Soon after, the police attempt to capture Alden, only to end up getting massacred in the ensuing telekinetic barrage. Undeterred, they try again with the aid of Cole, this time successfully arresting and imprisoning the gang leader; incarcerated at Eagle Point Penitentiary, Alden is placed under heavy guard and kept in restraints designed to suppress his telekinetic powers. Unfortunately, the Dust Men soon take steps to rescue their leader, assaulting the prison with an army of gunmen and conduits; though Cole is able to defeat them, the army succeeds in destroying the generators powering the prison - and Alden's restraints. By the time Cole and Zeke arrive at his cell, Alden has massacred the guards and escaped.

Retreating to the tower, Alden fortifies his defenses and prepared himself for the final stage of his plans. However, at the last minute, he finds himself foiled by Cole and Zeke, who steal the Ray Sphere from the tower; in turn, things go awry when Kessler arrives at the tower and - recognizing Zeke's ambitions for superpowers - encourages Zeke to surrender himself and the Ray Sphere. To Cole's disbelief, Zeke complies. As the two depart in a helicopter, Alden throws a temper-tantrum violent enough to rip his tower to pieces and pursues Kessler in a colossal golem formed from the tower's wreckage, destroying most of the bridge leading into Empire City's Historic district in the process.

Despite the half-formed golem's impressive strength, Cole is able to defeat the thwarted mentalist in the ensuing boss battle. Distracting Cole with an offer of alliance, Alden then takes advantage of his indecision by flinging himself off the bridge and into the river below. However, knowing the resilience of conduits, Cole concludes that Alden survived the fall.

Alden did survive as Cole predicted, but his luck ultimately ran out once captured by Moya Jones and sent to one of DARPA's facilities for experimentation. He tried to fight back despite the restraints using his power, but was knocked out by Moya. She then orders her men to vivisect him despite not being properly sedated.

Alden's later shown to be operated on by a surgeon, died due to improper vivisection.

Bitter, vengeful and foul-tempered, Alden is driven to take revenge on Kessler by any means available to him and achieve what he believes to be his destiny; years of brooding over his lost birthright and the enhancement of his powers have given him an impressive delusional streak, believing himself unmistakably destined for greatness - not merely as a leader of the First Sons, but as a living golem ruling over Empire City. Anyone attempting to thwart his grandiose ambitions quickly becomes the target of one of his titanic fits of pique - either a screamed, barely-coherent rant, a hail of flying debris, or some combination of the two.

Despite his many flaws, Alden is a highly intelligent man and a natural leader, able to gather the homeless people of Empire City into a well-organized army of soldiers, conduits and even suicide bombers. 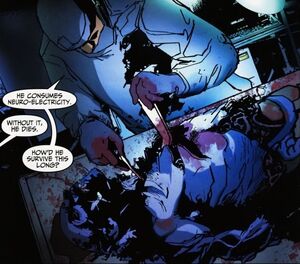 Alden's death in the comics.