Start a Wiki
Aldith (Angie in Japanese Dub,) is a member of Team Plasma in the Pokémon anime.

She was voiced by Lori Gardner.

Aldith first appeared in Team Plasma's Pokémon Power Plot!, observing Colress's work with controlling wild Pokémon with radio waves. During the tests, she experienced some friction with the scientist in terms of their ultimate goals; while Aldith expected the results of the experiment to help Team Plasma's takeover of Unova, Colress was merely interested in unlocking the true strength of Pokémon. When Looker, Ash and his friends arrived, she ordered her fellow grunts to hold them off until Colress's test subjects were battle-ready, at which point she led a retreat to lure her foes into their observatory base. Aldith commanded Colress's brainwashed wild Pokémon against the intruders, as well as Pikachu when Colress attached a transmitter to its head. When Pikachu managed to overcome the brainwashing, Aldith had to remind an intrigued Colress about the situation. After Team Rocket's interference destroyed Colress's machine, freeing the mind-controlled Pokémon, Aldith joined her teammates in retreat, using a self-destruct mechanism to destroy the observatory and get rid of the remaining evidence of their activity.

She reappeared in Team Plasma's Pokémon Manipulation!, where she was once again monitoring a mind-controlling experiment of Colress, this time on a Haxorus. When Team Rocket showed up in an attempt to steal Colress's mind-controlling device, a battle started between Aldith's Liepard and Jessie and James's Woobat and Amoonguss. During the battle, one of Liepard's Shadow Balls missed its target and accidentally hit the machine, freeing the controlled Pokémon and forcing Team Plasma to retreat.

Aldith had a short appearance in Secrets From Out of the Fog!, communicating with Ghetsis alongside Colress.

She appeared in Meowth, Colress and Team Rivalry! as part of Colress's security force at his latest lab. When Team Rocket appeared, she, along with Brad and several other Grunts, chased the trio out into the woods. There, they were drawn into a trap and did not escape for some time.

Aldith appeared with the rest of Team Plasma for the beginning of their operation at the White Ruins in Ash and N: A Clash of Ideals!. She appeared in Team Plasma and the Awakening Ceremony! and BW122 as well. She, along with Ghetsis, Colress, and Barret , was arrested in the end. 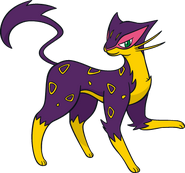 Liepard
Add a photo to this gallery

Retrieved from "https://villains.fandom.com/wiki/Aldith?oldid=2910032"
Community content is available under CC-BY-SA unless otherwise noted.