Dismantle the gold reserve by means of sabotaging

Aldrin Klordane is the main antagonist of the Chip 'N' Dale Rescue Rangers pilot "To The Rescue". He is Detective Drake's framer, Fat Cat's master, Percy's boss, and Professor Norton Nimnul's colleague. He is an infamous jewel thief who plots to use the ruby, ice pack, and "fruitquake" to knock down the gold reserve. He was the second Human besides Ninmul knew about the Rescue Ranger's existence.

He was voiced by Alan Oppenheimer, who played the voice of Alistair Crane in Passions and Ming the Merciless on the 1979 version of Flash Gordon.

The crime lord Aldrin Klordane was supposedly drowned a year ago, but that was revealed to be a faked death, and upon his return, he sends a thief by the name of Percy to steal a Clutchcoin ruby necklace. But police officer Donald Drake and his pet dog Plato recover the stolen ruby necklace. Klordane later hatched a bigger plan.

At the police station, Donald presents the chief the ruby necklace as evidence for it is connected to the scheming Klordane. When the chief puts the necklace in one of his desk drawers, Klordane sends his pet Fat Cat to snatch the necklace out of the drawer and retrieve it back for him. Fat Cat goes to Donald and Plato's office, removes the ruby from the necklace, and puts the necklace, airline tickets, and gambling debts in Donald's coat pocket to frame him. When he escapes from Plato and the other police, he gives the ruby to Klordane. Klordane and his thugs were recently at his old hideout, the Happy Tom Cat Food Factory. He and his thugs left the room after Fat Cat secretly snatches the ruby. Later, after Fat Cat and his gang are out at sea after getting out of a boat, Fat Cat remembers that he forgot to give the ruby back to his master Klordane. So he quickly returns the jewel to his master without him finding out it was missing. Klordane heads to Glacier Bay.

Klordane orders a mad scientist named Professor Nimnul to construct a giant laser cannon powdered by the ruby. After finishing it, Professor Nimnul uses the laser cannon to slice up the ground so Klordane's choppers can lift it into the air. Pleased with this, Klordane leaves in his helicopter, leaving Fat Cat behind with Nimnul. The next day, Klordane captures Drake (but not Plato) and brings him to see his master plan unfolding, but when Nimnul reports to him that the ruby was missing, he orders Nimnul to retrieve it, "or I'll get an elephant gun".

Later, after the Rescue Rangers freed Plato from a dog pound and discovered a subway entrance they were looking for, Klordane and Percy come by and recognize Plato and they capture him and chain him to Klordane's train. Klordane now explains his master plan to his thug Drake: he has smuggled the ice in from Glacier Bay, and his thugs are now piling it up under the foundation of the Federal Gold Reserve. At the same time, they are also mixing lime Jell-o, which is then poured on top of the ice, creating the world's largest gelatin dessert. Klordane, it turns out, plans to use it to trigger an earthquake that will crack the Federal Gold Reserve. He then has Professor Nimnul do just that, sending a rainfall of golden coins and bricks to fall down into his train cars.

The Rescue Rangers find Plato, who tells them to find a way to alert the police of Klordane's whereabouts. The Rangers triggered another earthquake to bring down the whole Gold Reserve building and the investigating cops within. The cops come running out, but Klordane escapes onto his train and takes off with the ruby, taking Plato with him and blocking a tunnel entrance.

The Rangers catch up and Plato tells them to stop the train and when they get to the front, Klordane swats them and tries to speed up the train. Chip and Dale manage to hit a lever that sends the train to a dead end. Klordane became furious with the Rangers for ruining his plan. Plato frees himself from the chain and runs to Klordane. The train flies out of the subway and Klordane lands right in the middle of the police captain's office and was immediately brought to justice. 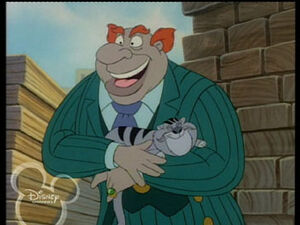 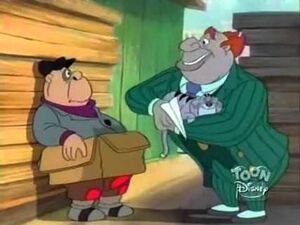 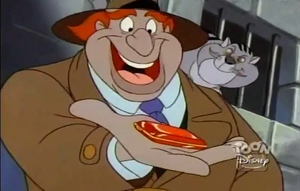 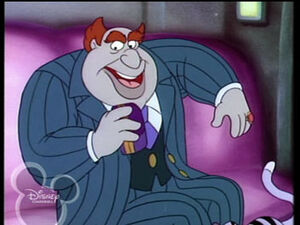 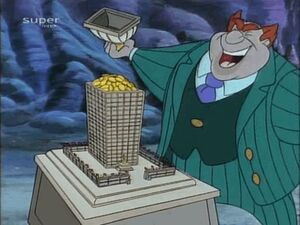 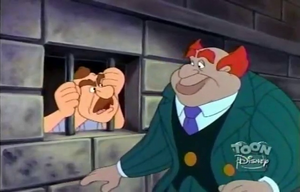 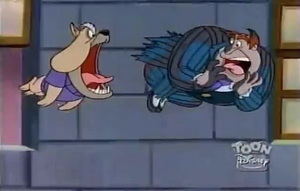 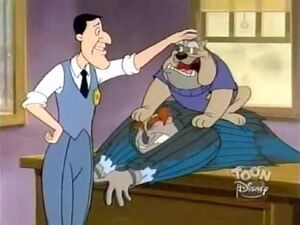