Resurrecting dragons.
Mocking and taunting the Dragonborn.
Feasting on the souls in Sovngarde.

Alduin, also known as The World-Eater, is the Nordic God of Destruction and the main antagonist of The Elder Scrolls V: Skyrim. He is the eldest son of the main god in the series, Akatosh, the god of time, and his evil counterpart. He is also the elder brother of Paarthurnax, who was his chief lieutenant during the Dragon War but ended up betraying him and helped the mortals instead.

He was voiced by Daniel Riordan, who also played Bhunivelze in Lightning Returns: Final Fantasy XIII and Colonel Matthew Garret in Days Gone.

Long ago, Alduin, the eldest son of Akatosh, the god of time, was defeated by the Ancient Nord Heroes Gormlaith Golden-Hilt, Hakon One-Eye and Felldir the Old, who used an Elder Scroll to send him forward in time and hopefully never return. Unfortunately, he came out of his temporal snare in the land of Skyrim, which is when the game The Elder Scrolls V: Skyrim takes place. Taking the form of a monstrous black dragon, he sets out to destroy Nirn (the world where The Elder Scrolls takes place) with the help of his servants (dragons). It is up to the player, the last of the Dragonborn, to stop him.

Eventually, the Dragonborn learns of their true identity and is contacted by one of the remaining members of the Blades named Delphine to actually confirm their identity. They set out to Kynesgrove, where the two witness Alduin resurrecting a dragon named Sahloknir, one of his lieutenants slain in the aftermath of the Dragon War from the nearby mound. The Dragonborn and Delphine defeat Sahloknir, and the former then absorbs its soul, confirming Delphine's suspicions. She sends the Dragonborn to the Thalmor Embassy, believing that they might have had something to do with the dragons returning to Tamriel, only to find out they know nothing about it. Later on, Esbern, a forerunner of the Blades, who is located in the Ratways in Riften, the capital city of the Rift Hold, reveals information about Sky Haven Temple, a temple located in the Reach, containing everything the Dragonguard, the predecessors of the Blades, knew of Alduin's return on a structure known as "Alduin's Wall".

Eventually, the Dragonborn is tasked to learn Alduin's Bane, a shout called Dragonrend which temporarily grounds dragons mid-flight. In doing so, the Dragonborn and Paarthurnax are ambushed by him after activating the (unusual) time warp with the Elder Scroll, but the two of them manage to hold off and defeat Alduin temporarily, despite his taunts and claims of power. Afterwards, he flees, only for the Dragonborn to learn from Paarthurnax that he is attempting to head for Sovngrade, the Nordic heaven to absorb the souls dwelling there.

Alduin is the son of Akatosh, the chief deity of the Nine Divines in the Elder Scrolls lore. In fact, all dragons are children of Akatosh. Since the Dragonborn has the soul of a dragon, Alduin could technically be the Dragonborn's brother, but this is subjected to debate as they are also mortal.

Like many typical villains, Alduin is very arrogant, a trait he attempts to counter by accusing his opponents of. Once his goal is revealed in the storyline, it is revealed that he is also misanthropic, believing that Dragons (or Dovah) are superior species against men. As stated by Odahviing, Alduin's former right-hand, many of the Dovah have begun to question Alduin's lordship because of his arrogance and his defeat atop the Throat of the World by the Dragonborn and Paarthurnax. 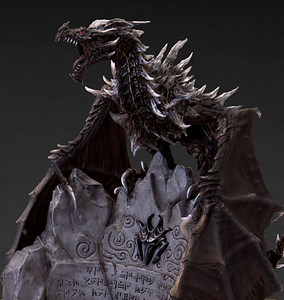 A statue of Alduin that comes with the special edition of The Elder Scrolls V: Skyrim. 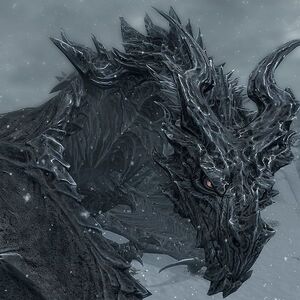 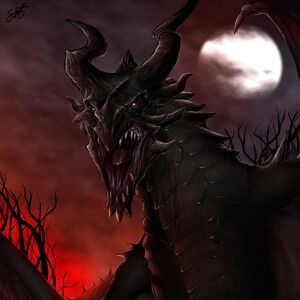 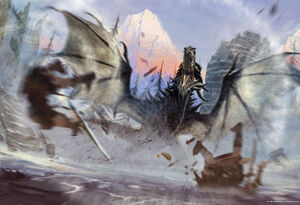 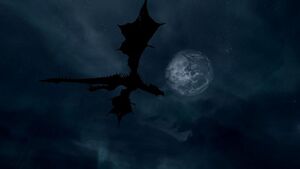 Alduin and the moon. 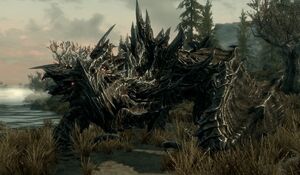